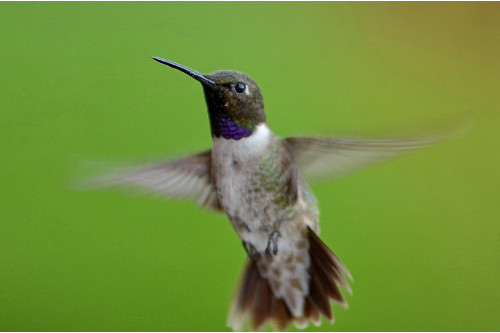 Characteristics and Range At first glance, the Black-chinned Hummingbird may seem oddly misnamed; especially when the sun catches a bright violet band across the adult male's gorget. It is the chin and upper throat area that is "velvety black" (Baltosser and Russel 2000). The breeding range extends through western North America from the central highlands of Mexico to its northern limit in southern British Columbia (Baltosser and Russel 2000). Most Black-chinned Hummingbirds overwinter along the southwestern Pacific coast of Mexico.

Distribution, Abundance, and Habitat The Black-chinned Hummingbird has been expanding its range in British Columbia since it was first recorded in the early 1900s (Munro and Cowan 1947, Campbell et al. 1990). The Atlas results document a continuation of this expansion, from the population core in the Okanagan and Similkameen valleys of the Southern Interior Ecoprovince, into the Shuswap, Thompson-Nicola, Creston Valley, and Southern Rocky Mountain Trench areas; with scattered possible breeding records in the Cariboo-Chilcotin region of the Central Interior Ecoprovince. This northern expansion has continued since the Atlas survey period, as confirmed by banding records (A. Moran pers. obs.). It is probably most easily detected at feeders and may have been overlooked in some Atlas squares.

The Probability of Observation data closely matched the distribution noted above, suggesting that the Southern Interior Mountains and Southern Interior ecoprovinces now share the core of the provincial population. Too few data were collected on point counts to draw firm conclusions on abundance. Most records were from the Interior Douglas-fir Biogeoclimatic Zone from 250 to 1,000 m. The Pobs model indicated there was a similar likelihood of finding the species in the Bunchgrass and Ponderosa Pine biogeoclimatic zones also, neither of which had many records.

The Black-chinned Hummingbird usually nests in deciduous trees and shrubs. In British Columbia, it is most often found at low-mid elevations in areas with riparian woodland, human habitation, or orchards. Farther south, this hummingbird is found in a wide range of habitats, from urban to natural or disturbed landscapes, in semi-arid or desert areas near water, as well as in riparian areas and open woodland. One study suggests nests clustered in close proximity to Accipiter nests enjoy higher reproductive success from reduced predation (Greeney and Wethington 2009).

Conservation and Recommendations There are no conservation concerns for the Black-chinned Hummingbird given its long-term range expansion (British Columbia Conservation Data Centre 2014). Population trends and distribution should continue to be monitored via banding (Finlay 2007). Birders are encouraged to document the expanding range of the species, especially records indicating breeding, by reporting sightings through programs like eBird.