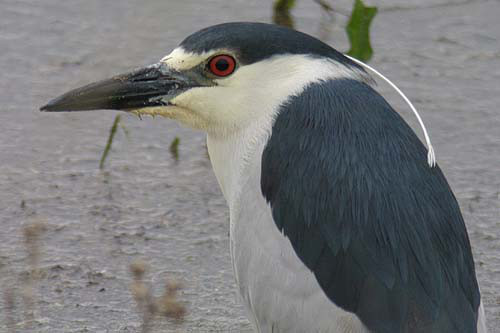 Characteristics and Range The Black-crowned Night Heron is the most widespread heron in the world. Some populations are migratory and others sedentary. In North America, the species occurs across central and southern regions, north to the Canadian Prairies (Hothem et al. 2010). Most northern breeders migrate south to overwinter, but some birds remain quite far north, including in the Fraser River delta, where British Columbian birders are familiar with the species because small numbers have overwintered annually since 1982 at the Reifel Migratory Bird Sanctuary (Campbell et al. 1990). The species is largely crepuscular and nocturnal, so can be hard to find by day because it spends much if its time roosting motionless.

Distribution, Abundance, and Habitat There are two British Columbian breeding records, both from Reifel Migratory Bird Sanctuary on Westham Island in the Fraser River delta, in 1973 and 1975 (Campbell et al. 1990).

During the Atlas, two breeding season records were noted, both in July, one in 2008 and one in 2010, in the Fraser River delta, but away from Westham Island. One was in dense riparian habitat near the confluence of Como Creek and the Fraser River, a location which also supported a pair of breeding Green Herons. Subsequently, this site was intensively cleared of invasive plant species, and in 2009 neither Green nor Black-crowned Night herons were re-observed. The other Atlas observation was of a bird flying over potentially suitable habitat near the Nikomekl River. On Westham Island, potential breeding habitat at Reifel Migratory Bird Sanctuary and adjacent Alaksen National Wildlife Area was extensively searched during the Atlas, but no adult night-herons were found outside of their normal August to April overwintering period.