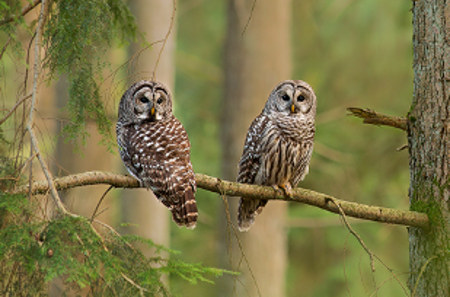 Characteristics and Range The Barred Owl is one of the most conspicuous members of its family in British Columbia, easily detected by its loud, raucous "Who cooks for you?!" calls. This mid-sized, dark-eyed, "earless" owl is most similar to the very rare Spotted Owl, but can be visually distinguished by its vertical brown belly stripes and grey-brown cast to the body plumage. It is resident throughout eastern North America east of the Great Plains and north to the southern fringes of the boreal forests, across the parklands and southern boreal forests north of the Great Plains, and throughout the forests of the western cordilleras from northern British Columbia south to northern California. There are isolated populations in the Mexican Sierra Madre.

Distribution, Abundance, and Habitat Barred Owls are new arrivals in British Columbia; the first record was from the Liard River in 1943 (Munro and Cowan 1947). Since then, the species has spread south throughout the province, and is now found throughout British Columbia except for Haida Gwaii. A paucity of records from the Northern Boreal Mountains and Taiga Plains suggest low and localized populations there. The provincial distribution has not changed significantly since The Birds of British Columbia was published in 1990, although the Atlas filled in gaps in the northern Coast Mountains, western Vancouver Island and the southeastern corner of the province.

Conservation and Recommendations The Barred Owl expanded its range dramatically in the past century, moving across the top of the Great Plains and filling much of the western cordilleras of North America (Mazur and James 2000). The cause of this expansion is unknown; suggested reasons are anthropogenic and include fire suppression in boreal forests, increasing age of forest and size of trees (for nests), and riparian forest establishment and shelterbelt planting in the northern Great Plains. In southwestern British Columbia it encountered the Spotted Owl, and competition with that species has exacerbated the Spotted Owl's already difficult situation. The two species have hybridized in British Columbia. Predation by the Barred Owl has also been implicated in the sudden population crash of Western Screech-Owl in the Georgia Depression (COSEWIC 2012). In some parts of its range, the Barred Owl is a species of concern because of its preference for mature forests (Mazur and James 2000), but its recent expansion history in the western cordilleras strongly suggests that it is not at risk in British Columbia.