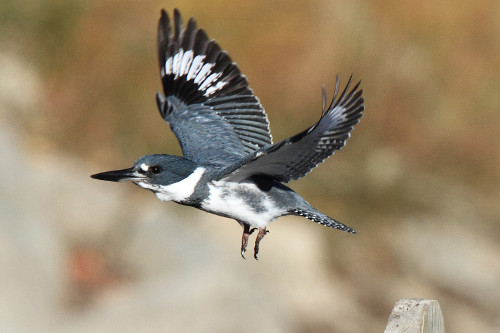 Characteristics and Range This spectacular, large kingfisher with its outrageous "Mohawk" crest and startling staccato rattling call is one of North America's most widespread birds. It breeds across the continent from the Low Arctic south to the United States Southern Coastal Plains and arid southwest. It is a partial migrant; northern breeders migrate south to winter in ice-free areas, some moving as far as Central America and the Caribbean (Kelly et al. 2009).

Distribution, Abundance, and Habitat The Atlas surveys show the Belted Kingfisher is still widespread throughout the province; comparison with The Birds of British Columbia indicates there has been no appreciable change in distribution, provincially or locally, over the past two decades.

The Probability of Observation model highlights several most likely places to find the bird: valley systems around Vancouver Island, in the southern Coast Mountains, on Haida Gwaii, in the Stikine and Taku river basins in the northwest, and parts of the Columbia and Duncan river drainages in the West Kootenay. Whilst point counts are not the best technique for sampling this bird's linear wetland habitat, they do suggest the lowest lying valleys (below 250 m elevation) in the Coast and Mountains and Southern Interior Mountains ecoprovinces also support the highest abundance. Extensive areas of moderate PObs values (but lower abundance) occur across the wetland-studded plateaus of the Central Interior and Sub-boreal Interior ecoprovinces.

Belted Kingfishers prefer clear, fresh or salt water wetlands, especially with rocky shoals and shallower fast-flowing sections, in close proximity to natural or man-made exposed banks where they can excavate nest burrows, and with abundant perches from which they can forage for prey, chiefly fish, but also crayfish and other larger aquatic invertebrates.

Conservation and Recommendations The Breeding Bird Survey shows a long-term decrease in Belted Kingfishers, across Canada and in British Columbia; reasons for the decline are not well understood, but declining habitat quality, contaminants, reduction in available nest sites (especially man-made sites like gravel pits, road cuts and quarry sites), and human disturbance are all potential contributors.