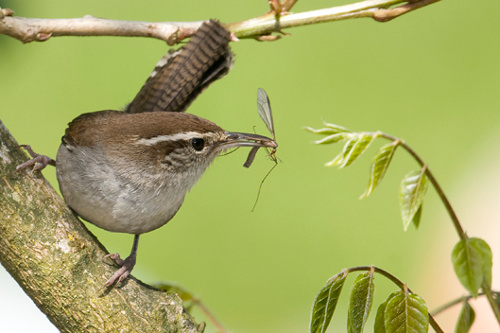 Characteristics and Range The Bewick's Wren is a boldly marked but often skulking songster. It is endemic to North America, mainly resident in western biomes, and a short-distance migrant or resident in southeastern biomes, reaching its southern range limit in the Mexican Sierra Madre. It is unusual in having undergone major range expansion and contraction over the past century and a half. In the mid-late 1800s it expanded across much of eastern North America, but between the 1920s and 1970s retracted again, and is now very rare east of the Mississippi River. It has also recently declined in western and southern portions of the continent (Kennedy and White 2013).

Distribution, Abundance, and Habitat The Bewick's Wren occupies the far southwest corner of the province, where its range maps rather neatly onto the boundaries of the Georgia Depression, the core of the provincial population. Its distribution here appears to have changed little since The Birds of British Columbia was published in 1997. In the Southern Interior, however, a scattering of records indicate a small range expansion, with breeding confirmed in the valley floors of the Okanagan and Kettle rivers respectively. These are likely birds moving into British Columbia from the lower reaches of these rivers in Washington, to the south.

Atlas point counts show highest abundance in the Georgia Depression in the Coastal Douglas-fir biogeoclimatic zone; abundance is much lower in the Coastal Western Hemlock zone. Bewick's Wren abundance is four times higher below 250 m than above that elevation, although it occupies elevation ranges of 0-500 m in the Georgia Depression and 250-650 m in the Southern Interior. Campbell et al. (1997) note that nesting mainly occurs below 100 m, with a maximum elevation reported for breeding of 225 m. The Atlas recorded breeding at 500 m in the Kettle River valley in the Southern Interior.

The species uses a wide variety of edge habitats in natural and anthropogenic landscapes, including conifer and mixed deciduous forests, riparian woodland, farmland, and parks and gardens in suburban and urban areas. One feature consistent to all of these habitats is patches of dense understorey vegetation, like Salmonberry (Rubus spectabilis), Nootka Rose (Rosa nutkana), Salal (Gaultheria shallon) and blackberry (Ribus) species in coastal regions, and Saskatoon (Amelanchier alnifolia) and European Hawthorn (Crataegus monogyna) in the interior.

Conservation and Recommendations The Province of British Columbia has a high responsibility for Bewick's Wren conservation, so ongoing long-term population declines across North America, including within its British Columbia range, are a concern. Southern and eastern populations of Bewick's Wren have been impacted by the range expansion of egg-removing House Wrens (Kennedy and White 1996). This may not be a major factor in British Columbia, where habitat loss and degradation resulting from industrial and residential development in the Georgia Depression are more likely impacts. Research is required to identify the causes of the decline and propose conservation solutions.