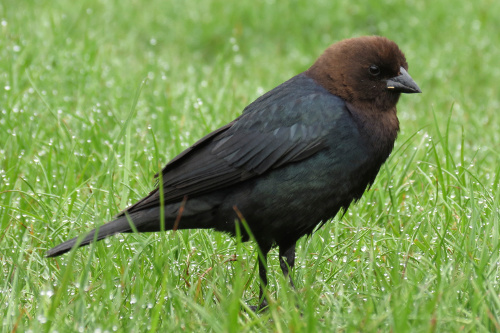 Characteristics and Range The Brown-headed Cowbird is North America's best-known obligate brood parasite, meaning that it does not build its own nest but instead lays its eggs in other species' nests. It has been recorded parasitizing over 200 bird species, with at least 80 species targeted in British Columbia, including more than 20 that are commonly parasitized (Campbell et al. 2001). Formerly concentrated in the central part of the continent where it followed American Bison (Bison bison) herds and was called the "buffalo bird", Brown-headed Cowbird populations exploded across North America with the clearing of forests. With these population expansions cowbirds were implicated in the decline of many songbirds (Lowther 1993). Its range now spans most of North America from the southern Boreal Forest south to central Mexico; northern breeding populations are short to medium-distance migrants.

Distribution, Abundance, and Habitat In British Columbia, the Brown-headed Cowbird is widespread in southern coastal, southern interior, central and northeastern regions. A major provincial range expansion occurred over the past century, but the Atlas distribution appears much as that depicted in The Birds of British Columbia published in 2001, except for a slightly increased area of occupancy in the northeast.

It is a common bird of natural grasslands and human-modified habitats especially agricultural land and fragmented forest, occurring in a wide variety of drier biogeoclimatic zones, preferring lower elevations, and reaching peak abundance between 250 and 500 m, but it will breed as high as 2,000 m.