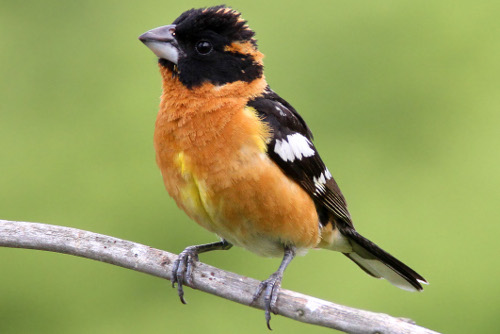 Characteristics and Range The Black-headed Grosbeak is known for its distinctive colours and melodious song. It breeds from subalpine forests to desert riparian zones throughout western North America, from southern British Columbia east to the Prairies, and south to the Chihuahuan Desert in Mexico (Ortega and Hill 2010). Sedentary only in the far south of its range, it makes a complete migration between most of the breeding range and wintering areas in western Mexico.

Distribution, Abundance, and Habitat The Black-headed Grosbeak breeds across the southern part of the province, almost entirely south of 52° N, except in the Northern Pacific Rainforest Bird Conservation Region, within which its range extends north to the Stikine River valley at 57° N. Although there has been no historical change in continental distribution (Ortega and Hill 2010), there has been a steady expansion of its range across British Columbia over the past 50 years (Campbell et al. 2001) and the Atlas shows continuing expansion in the interior.

The highest Probabilities of Observation, in the Georgia Depression and at lower elevations in the southern Coast and Mountains Ecoprovince, match the areas of highest abundance based on Atlas point counts. Within these areas, abundance is highest below 250 m in the Coastal Western Hemlock biogeoclimatic zone, although the Probability of Observation model indicated the likelihood of finding the species is higher in Coastal Douglas-fir than any other biogeoclimatic zone. The Black-headed Grosbeak uses diverse habitats including deciduous forest and woodlands, shrub thickets associated with wetlands, and lightly wooded habitat in suburban areas. A well-developed understory combined with large trees appears to be a key habitat combination.

There has been a significant increase in the relative abundance of Black-headed Grosbeak in British Columbia since 1970, based on Breeding Bird Survey data (Environment Canada 2013), but the centre of the provincial population (in the Georgia Depression Ecoprovince) has not changed since The Birds of British Columbia was published in 2001.

Conservation and Recommendations Although there is no overall conservation concern, with Black-headed Grosbeak populations stable or increasing across the entire breeding range (Environment Canada 2013), this species is susceptible to habitat loss through the conversion of deciduous woodlands along creeks and rivers to housing or agricultural developments.