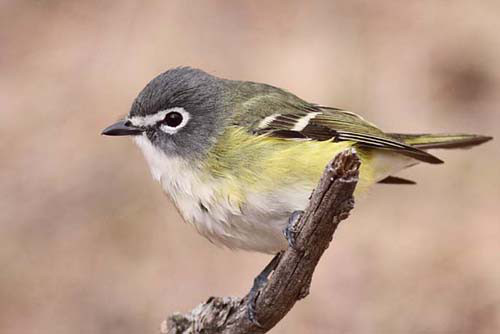 Characteristics and Range This brightly-coloured vireo is easily recognized by its blue-gray head and bright white 'spectacles'. For approximately four decades, the Blue-headed Vireo was considered a subspecies in the Solitary Vireo complex, but has since been restored to full species status (Banks et al. 1997). The species breeds from the Atlantic coast south through the Appalachian Mountains, and west through temperate and southern boreal forests to the Rocky Mountain foothills, reaching its westernmost limit in northeastern British Columbia. It winters in the Southern Coastal Plains of the southeastern United States, south through Mexico to the mountainous regions of Central America. Throughout its Canadian breeding range, it is the only vireo found in conifer-dominated or mixedwood forests (Morton and James 2014). Its song is generally pure tone, but in the western extremes of its range can have the frequency modulation, or burry quality, characteristic of Cassin's Vireo (Semenchuk 1992), potentially complicating identification where either species could be present.

The most extensive high Probability of Observation values were in the Peace River and Fort Nelson River lowlands, closely matching the breeding evidence distribution. The PObs model also predicted high likelihood of occurrence along the Liard River and into the Northern Rocky Mountain Trench, where there were many fewer Atlas records. Point counts confirmed the provincial centre of abundance remains in the Boreal and Taiga Plains ecoprovinces.

Within British Columbia, the Blue-headed Vireo is a characteristic bird of mature and old mixedwood forest, White Spruce (Picea glauca) and Trembling Aspen (Populus tremuloides) stands in particular (Phinney 1998), but pairs are generally widely spaced (Morton and James 2014). Lower densities may be found in pine-aspen or spruce-cottonwood stands. It is rarely found in pure coniferous or deciduous forest. Nests are typically built well below the tree canopy in a shrub or sapling. This is similar to the general habitat types used across Canada, but occupied stands in British Columbia tend to be older.

Conservation and Recommendations Breeding Bird Survey data show an increasing population trend across its Canadian range, and although the Blue-headed Vireo population appears to be expanding in British Columbia, long-term habitat availability is less certain. Forest harvesting removes breeding habitat, and regenerating stands are probably unsuitable for at least 80 years. Moreover, the preferred mixtures of deciduous and coniferous trees are being replaced with pure stands of either type as a result of government reforestation policies (Hobson and Bayne 2000, Lieffers et al. 2008, Kabzems et al. 2011).