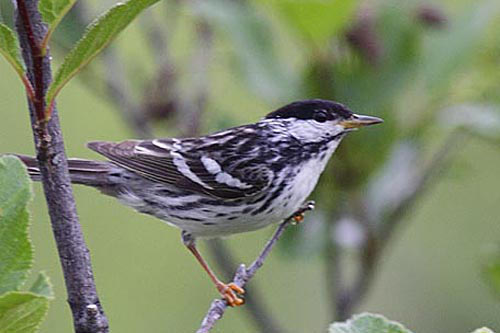 Characteristics and Range "Can you hear it?" is a question asked by bird-watchers with acute hearing who encounter singing male Blackpoll Warblers on their breeding grounds. This delightful songster has one of the highest frequency songs known among birds (DeLuca et al. 2013). It tests birders' hearing abilities across the species' range from coast to coast, in North America's boreal, taiga, and northern coniferous forests. This black-and-white warbler with bright orange-yellow legs can also be a challenge to see: pinpointing its location is difficult as it forages in the branches of spruce trees. Birds breeding in Alaska and northern British Columbia undertake the longest migration of any North American warbler, heading east to Atlantic Canada and then south over the Atlantic Ocean to the wintering grounds in South America, a journey of up to 8,000 km (DeLuca et al. 2015).

Conservation and Recommendations Up to 75% of Blackpoll Warblers spend the breeding season in Canada (DeLuca et al. 2013). Yet, despite being one the most common birds in its breeding range, little is known about its breeding ecology or population trends. Breeding Bird Survey trends across Canada and British Columbia show long-term declines but the trends have low reliability (Environment Canada 2014) due to the majority of routes being conducted south of the species' core breeding range. Increasing timber, oil, and natural gas extraction is impacting some Boreal Forest bird populations, contributing to long-term declines of Blackpoll Warblers (NABCI-U.S. 2014).