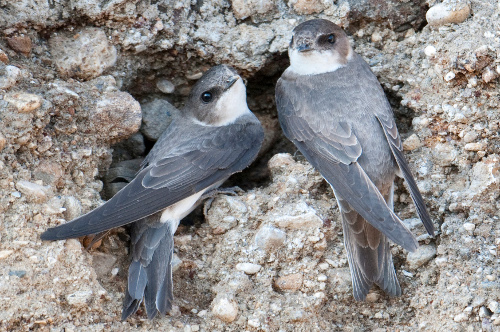 Characteristics and Range Nothing better typifies the communal Bank Swallow than a sandy cut bank pock-marked with dozens or even hundreds of nest holes and a flurry of birds buzzing in all directions in front of the colony. This small, fast-flying, band-breasted swallow migrates long distances from northern breeding grounds to winter in tropical and subtropical regions with a range that spans much of the globe. In North America it breeds from coast to coast, from the Boreal Forest in the north to the Gulf of Mexico in the south, and winters on the Pacific slope of southern Mexico and throughout much of South America (Garrison 1999).

Distribution, Abundance, and Habitat Breeding is patchy across most of interior British Columbia east of the Coast Mountains. Distribution is heavily weighted toward the southern Central Interior, Southern Interior and Boreal Plains ecoprovinces as well as southern valleys of the Southern Interior Mountains. The general pattern of distribution and breeding is similar to when The Birds of British Columbia was published in 1997 except for the lack of Atlas breeding evidence in the Georgia Depression and fewer breeding locations on the Nechako Plateau and in some extreme northern portions of the province. It is not clear whether these reductions are part of the widespread decline (COSEWIC 2013), or reflect the briefer snapshot nature of the Atlas. More observations and breeding evidence were obtained for the Williston Lake drainage during the Atlas than were known when The Birds of British Columbia was published.

Conservation and Recommendations Bank Swallows are not currently listed as being of conservation concern in British Columbia and global responsibility is considered low. COSEWIC (2013) assessed the species as Threatened, based on an estimated loss of 98% of the Canadian population over the past 40 years. The COSEWIC (2013) assessment indicates that a review of the species' status in British Columbia is warranted, although British Columbia conservation status ranks are weighted strongly by low populations (rarity) rather than declining trends of common species. Protection and management of existing and potential nesting habitat is recommended, but conservation recovery actions will likely be complex and involve maintenance of aerial insect populations, reduction of toxic chemicals and response to climate change.