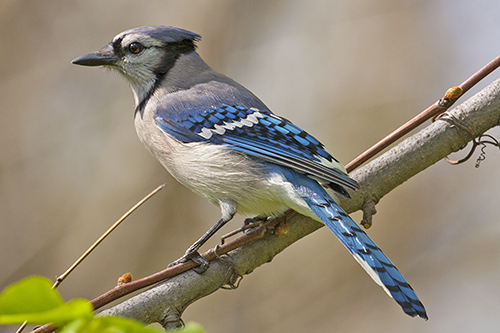 Characteristics and Range Gregarious and vocal, the Blue Jay is a common endemic jay found in deciduous and mixed deciduous forests of central and eastern North America. Overall, the species is expanding its range northwestward. Many Blue Jay populations are resident, but this is the only New World jay to exhibit latitudinal migrations, with some populations migrating south from northern regions during cold winters (Smith et al. 2013). Characterized by a striking blue crest, white face and underparts with a black "necklace", and boldly marked blue, white and black upperparts, the Blue Jay is very distinctive. At the western edge of its range, there is very limited evidence that the Blue Jay may hybridize with the similar Steller's Jay (Smith et al. 2013, Campbell et al. 1997).

Distribution, Abundance, and Habitat In British Columbia, the Blue Jay breeds only in parts of the northeast and southeast. It is widespread in the Peace River lowlands, and local in the Fort Nelson River lowlands and the East Kootenay. This distribution has expanded westward even since The Birds of British Columbia was published in 1997, with breeding confirmed for the first time by the Atlas in two ecoprovinces, the Taiga Plains and Sub-Boreal Interior, as well as farther west than was previously known in the Southern Interior Mountains ecoprovince.

The centre of provincial abundance remains in the Boreal Plains ecoprovince (as noted by Campbell et al. 1997), between about 400 and 750 m elevation, exclusively in the Boreal White and Black Spruce biogeoclimatic zone. The species has been expanding west since the 1940s (Smith et al. 2013), a trend that is continuing today, with British Columbia being at the northwestern limit of that range.

The Blue Jay prefers deciduous and mixed deciduous-coniferous forests for breeding, especially forest edges, but also ventures into suburban gardens and even urban feeders during the breeding season.

Conservation and Recommendations Breeding Bird Survey data indicate that the population across Canada has increased since 1970, but is decreasing across North America. Urbanization, including changes in vegetation and increasing numbers of bird feeders, is the proposed cause of increase in Canada (Environment Canada 2011, Smith et al. 2013). Continued monitoring through programs like eBird and future Atlas efforts will be important in tracking any further range changes.