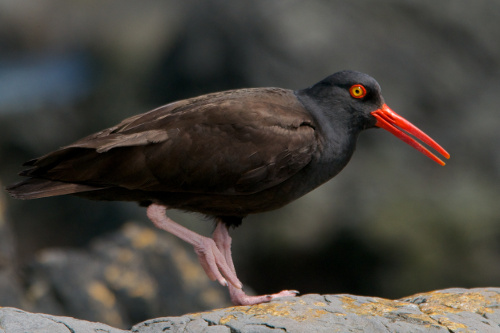 Characteristics and Range Instantly recognizable in appearance and behaviour, the Black Oystercatcher is a conspicuous year-round resident of British Columbia seashores. The species is endemic to the west coast of North America, where it is widely distributed from Baja California to the western Aleutian Islands (Andres and Falxa 2014). This large shorebird patrols intertidal habitats, using its long, bright red bill to pry open mussels and dislodge limpets from rocks. Breeding pairs hold and defend exclusive territories, making a nest scrape in suitable habitat just above the high tide line. In winter, the species gathers in flocks that can number hundreds of individuals.

Distribution, Abundance, and Habitat The Black Oystercatcher is widespread along the British Columbia coast, with clusters of confirmed breeding records throughout the Salish Sea, around much of Haida Gwaii, and within the Pacific Rim National Park on the west coast of Vancouver Island. There is no indication that the distribution has changed appreciably since The Birds of British Columbia was published in 1990. Partially migratory, the population in northern British Columbia is joined outside the breeding season by individuals from Alaska (Johnson et al. 2010).

If present, the Black Oystercatcher is not easily overlooked on surveys because of its large size, unmistakable appearance, and its generally noisy nature. However, much of the species' breeding range in British Columbia is remote and inaccessible. The Probability of Observation model highlights Aristazabel Island and adjacent coastline, where there are few Atlas records, as an area of potential importance; this overlaps with the Moore and Byers Islands Important Bird Area, designated for its globally important population of Black Oystercatchers (IBA Canada 2015). When The Birds of British Columbia was published, the population was estimated at 1,000-2,000 breeding pairs (Campbell et al. 1990); recent surveys (2005-2006) in the Salish Sea (Golumbia et al. 2009), and in Gwaii Haanas National Park Reserve by biologists with Parks Canada and Environment Canada, suggest that there has been little change in numbers since the 1980s.

Exclusively marine, the Black Oystercatcher is a year-round resident of rocky intertidal ecosystems. A top predator in these systems, it favours areas where dense mussel beds occur. Its breeding habitat includes gently-sloping gravel or rocky shorelines of sites ranging from large, forested islands down to small, bare rocky islets, along both inner and outer coasts.

Conservation and Recommendations The Black Oystercatcher, like other species of oystercatcher, is a good indicator of the relative health of coastal ecosystems. While breeding, it is generally unable to coexist with land predators such as rats, raccoons and mink, all of which have been introduced to some islands in British Columbia It is also susceptible to human disturbance and to oil spills. Black Oystercatcher nesting sites in the Salish Sea are largely protected, either through conservation-focused management, or restricted public access (Golumbia et al. 2009). British Columbia Supports >20% of the global population, so has a moderate global responsibility for its conservation (Environment Canada 2011).