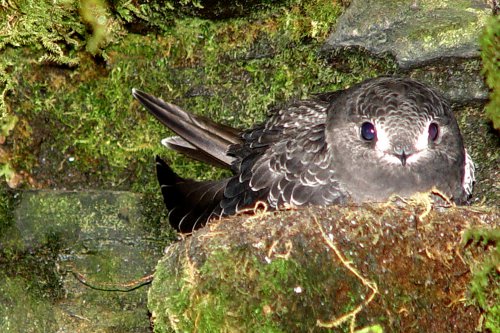 Characteristics and Range The Black Swift is the largest swift found in British Columbia and one of the least-studied bird species in the province. It is identified from the other two swift species by its large, all dark body, longer, broader wings, and more direct flight pattern interspersed with gliding. It is a wide-ranging species, with individuals during the breeding season occurring up to 40 km, and potentially 120 km, from the nest site. Black Swifts are found during the breeding season from southeastern Alaska, across the mountains of western North America, south to Central America and the Caribbean (Lowther and Collins 2002). Their wintering grounds were unknown until birds were recently discovered in the northwest Amazon basin (Beason et al. 2012).

Distribution, Abundance, and Habitat During the Atlas period, this species was detected in mountainous areas north to the Stikine and Peace rivers, but was absent from the Haida Gwaii archipelago and the far north. The distribution has not changed greatly since The Birds of British Columbia was published in 1997; the Atlas notes more records in the northern Rocky Mountains, potentially due to increased coverage, and fewer records in drier valleys in the Southern Interior. In British Columbia the species occurs from sea level up to 2,600 m (Campbell et al. 1990); however, the Atlas surveys recorded them only as high as approximately 1,800 m.

The Probability of Observation model predicts Black Swifts are most likely to be found in the Coast and Mountains and Georgia Depression ecoprovinces, which is where Campbell et al. (1990) considered them to be most numerous, but even here there is at best a moderate chance of encountering the species. Too few data were collected on point counts to draw conclusions on abundance.

Of the few nests that have been found in the province, including during the Atlas, the majority have been located behind waterfalls, on ledges of steep rock faces, on cliffs, and in caves and canyons. Many observations of birds were made close to the coast, but no nest sites were reported from marine environments, although the species does nest on coastal cliffs in California (Lowther and Collins 2002). It is thought that the moist, dark, and inaccessible environment found behind mountain waterfalls or on sea cliffs or caves is a critical habitat feature for this species (Chantler and Driessens 2000).

Conservation and Recommendations Black Swift has shown a suspected large, long-term decrease in Canada based on BBS results of low reliability; at the time of writing its status was being reviewed by COSEWIC as one of several aerial insectivores showing widespread declines (NABCI-Canada 2012), and in 2015 it was added to the Blue List by the British Columbia Conservation Data Centre. The province of British Columbia has a moderate responsibility for its global conservation due to the large portion of the global population breeding here. Little is known about the population size, actual nesting sites, survival, dispersal, or other basics of the ecology of this species with which to inform conservation. Future studies should aim to monitor existing nest sites, and identify new ones, to determine their annual usage and productivity.