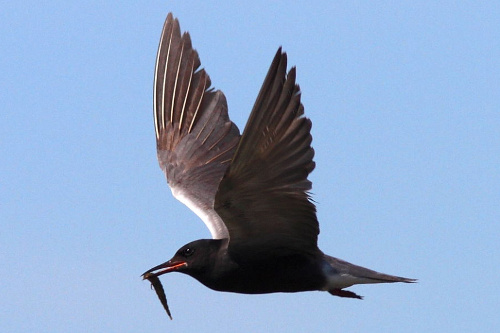 Characteristics and Range Quoted here in part, Bent (1921) provides the most evocative description of this graceful, freshwater tern: "a restless waif of the air, flitting about hither and thither with a wayward, desultory flight, light and buoyant as a butterfly...". The Black Tern breeds in colonies in productive wetlands at temperate latitudes across Europe, Central Asia and North America, migrating south to winter along the tropical coasts of Africa and Central and South America. In North America the core breeding range of the Black Tern is the Canadian Prairies, but extends north to the Boreal Forest, east to the Great Lakes, west to the Cascade Mountains, and south to the Sierra Nevada and southern Rocky Mountains (Heath et al. 2009).

Distribution, Abundance, and Habitat During the Atlas, Black Terns were confirmed breeding east of the Coast Mountains in areas of the lower Thompson, Peace, Fort Nelson, and Fraser river drainages with higher densities of wetlands. Breeding is much as depicted when The Birds of British Columbia was published in 1990, except that during the Atlas period no breeding or suspected breeding was noted for the Georgia Depression, where it was a rare and local breeder in the early 1960s (Campbell et al. 1990).

The highest probability of observing Black Terns roughly matches the clusters of confirmed breeding records, in patches in the Central Interior, Sub-boreal Interior and Boreal and Taiga Plains ecoprovinces. Observers are more than twice as likely to find terns in these areas as in any other ecoprovince. Breeding was noted between 400 and 1,400 m, but 60% of the observations appear to be clustered in the range of 600-800 m elevation. Most colonies were very small (fewer than 15 adult birds or less than 5 nests). Six colonies with 15 or more nests or 30 or more adults were recorded: three in the Cariboo, two in the Peace River lowlands and one in the Fort Nelson River lowlands.

The preferred breeding habitats are shallow, freshwater marshes, ponds and lakes with emergent aquatic vegetation. These wetlands are usually in open, forested habitats and sometimes grasslands. Nests are floating and placed within vegetation such as Cattail (Typha latifolia) or bulrush (Scirpus) species. Suitable wetlands occurred in a range of different biogeoclimatic zones; wetland productivity is a better indicator of Black Tern suitability than biogeoclimatic zone.

Conservation and Recommendations Although Black Terns are considered not at risk in Canada or British Columbia (Environment Canada 2011), and British Columbia's global responsibility for conservation stewardship is low, Breeding Bird Survey data for Canada indicate a long-term decreasing trend, Atlas observations suggested a reduction in range in British Columbia, and Gerson (1987) recommended a status of threatened for Canada. Fluctuating breeding numbers and a continued sense that overall numbers have declined in British Columbia suggest the need to further document the distribution, breeding success and trends in the province. Conservation of wetlands in mitigation of climate change impacts should benefit Black Terns.