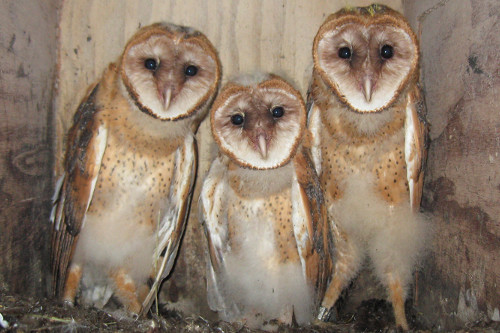 Characteristics and Range With its heart-shaped face and hissing screeches, the Barn Owl is different enough from typical owls to be placed in a separate family, the Tytonidae. It is also distinctive in flight, golden-buff above and whitish or buff below. Barn Owls feed on a wide variety of prey but prefer smaller rodents when available, e.g., voles (Microtus species), and will breed year-round if prey populations are high. It has one of the broadest ranges of any bird, found on every continent except Antarctica, thriving wherever winter snowfall is absent or minimal.

Distribution, Abundance, and Habitat In British Columbia, Barn Owls are primarily found at low elevations in the Georgia Depression ecoprovince, but are also locally found in valley bottoms of the Southern Interior (of the Fraser River at Lilloet, and along the south Okanagan River) and Southern Interior Mountains (along the Kootenay River at Creston). The species is a relatively new arrival in the province; the first breeding record came from the Fraser River delta in 1941 (Campbell et al. 1990). Barn Owls spread throughout the Georgia Depression over the next 50 years but there were no breeding records from the Interior of the province when The Birds of British Columbia was published in 1990. The Atlas has added breeding records from three areas in the southern valleys of the interior as noted above.

The British Columbia Barn Owl population was estimated at 250-1,000 individuals in 2010, but is most likely to be near the lower end of that estimate (250-500) (COSEWIC 2010). Hindmarch (2010) studied the population in the Fraser River delta municipalities of Surrey and Delta where about half of the Barn Owls of British Columbia are found and estimated the breeding population there to be just under 200 birds.

Conservation and Recommendations Barn Owl populations have apparently declined in British Columbia since the early 1980s (COSEWIC 2010) despite the few pairs that have expanded the species' range into the interior. The species was assessed by COSEWIC as Threatened (COSEWIC 2010) and is listed under the federal Species at Risk Act as Special Concern (Species at Risk Public Registry 2015). Threats to the species in British Columbia are primarily loss of foraging habitat due to changes in agricultural practices and loss of nesting sites as old, open barns are replaced by modern, closed structures (COSEWIC 2010). Barn Owl distribution is also influenced by highway location and use; occupied sites are more likely to persist where traffic use is lower and kilometres of highway are fewer (Hindmarch et al. 2012).