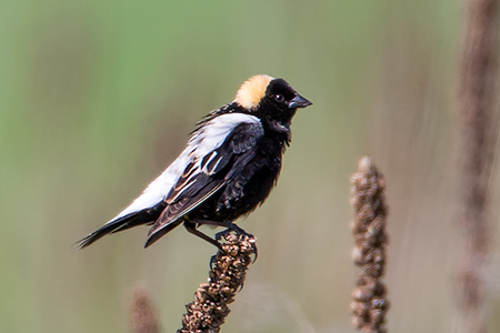 Characteristics and Range The polygynous Bobolink is highly sexually dimorphic in breeding plumage: adult males have black underparts and vivid patterns of black, white, gray and buff on their upperparts, whilst the female resembles a large striped sparrow. Named onomatopoetically for its "bobolicon" song (Gruson 1972), the male delivers an ecstatic-sounding warbling of bubbling, jangling notes (Sibley 2014) as it flies over its breeding habitat of grasslands and hayfields where the female builds its nest on the ground amid the long grasses and forbs. The Bobolink breeds locally in prairie, agricultural and other open areas of central North America from the Atlantic Coast to the western extent of its range in British Columbia. It is a very long-distance migrant, wintering in the grasslands of southern South America.

Distribution, Abundance, and Habitat The Bobolink is a rather sparsely distributed breeder across southern interior British Columbia. Historically, it bred locally from the South Okanagan and the East Kootenay north to the Cariboo Plateau, since when local extirpations may have occurred, but the Bobolink's provincial range has not changed appreciably (Campbell et al. 2001).

The majority of the very small provincial population is concentrated in the South Okanagan and Kootenay River valleys. In British Columbia, the Bobolink breeds in large open areas of grass and broad-leaved forbs, such as Timothy-grass (Phleum pretense) and Alfalfa (Medicago sativa) fields, pastures, weedy fields, and moist meadows (Campbell et al. 2001).

Conservation and Recommendations The Bobolink is considered Threatened in Canada because it has declined substantially since the late 1960s, particularly in eastern Canada (COSEWIC 2010), and is Blue-listed in British Columbia due to habitat loss. The Bobolink is negatively impacted by early mowing of hayfields that destroys suitable habitat, eggs and young birds (British Columbia Conservation Data Centre 2015). Continued global warming with its attendant warmer springs can only exacerbate the early mowing situation. Additional threats include habitat fragmentation, grazing, pesticide exposure and bird control at South American wintering roosts (COSEWIC 2010). Recommendations include an annual inventory of all British Columbian breeding sites and integrating the needs of Bobolinks into the management practices of landowners/farmers (Van Damme 1999).