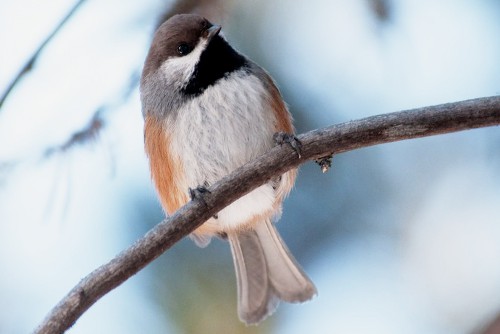 Characteristics and Range As implied by its name, the Boreal Chickadee is essentially restricted to North America's Boreal Forest, and subalpine coniferous forests extending south to the Cascade and Columbia mountains of southern British Columbia and the northern United States. Boreal Chickadees are non-migratory and have several adaptations which permit them to withstand some of the harshest conditions (extreme cold and short days) endured by any North American passerine (Ficken et al. 1996). They are easily distinguished from other chickadees by having a brown cap, bright rufous flanks, brown back, and a rather nasal and wheezy call.

Distribution, Abundance, and Habitat The Boreal Chickadee is widespread across northern British Columbia and at higher elevations east of the Coast Mountains in the central and southern interior of the province. The Atlas period distribution more-or-less corresponds with that known when The Birds of British Columbia was published in 1997.

Atlas Probability of Observation and point count data also agree with The Birds of British Columbia, highlighting the centres of abundance in the Northern Boreal Mountains Ecoprovince, in the Cassiar mountains and on the Stikine and Yukon plateaus, extending south through the Omineca Mountains into the Sub-Boreal Interior Ecoprovince. Overall, abundance declines and distribution becomes more discontinuous (isolated to high elevation mountain ranges) at lower latitudes in British Columbia. Boreal Chickadees tend to occur at higher elevations than the other chickadee species with highest local abundance from 1,750-2,000 m in southern parts pf the province.

These chickadees inhabit young and mature coniferous forest with a strong preference for spruce (Picea) species and sometimes fir (Abies) stands (Ficken et al. 1996). In the extensive spruce forests of central British Columbia, this species is replaced by the Black-capped Chickadee (Campbell et al. 1997) which is perhaps surprising from an ecological perspective.

Conservation and Recommendations The Boreal Chickadee has undergone a large, long-term decrease in the southern boreal regions of eastern North America (Environment Canada 2011), but Breeding Bird Survey trend precision is low in British Columbia and other western portions of the range. Given its preference for older forests that have commercial value (Hadley and Desrochers 2008) and the serious threat large-scale logging poses to birds using the entire Boreal Forest ecosystem (Imbeau et al. 2001), there are reasons to be concerned about the long-term integrity of Boreal Chickadee populations.