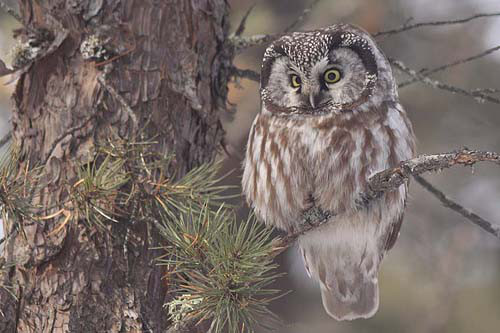 Characteristics and Range The Boreal Owl is a rather enigmatic species in North America, and until the 1980s was considered a rare bird of northern boreal forests across the continent with isolated outposts in the Rocky Mountains. With better access to high elevations and increased interest in nocturnal birding, it is now known to be a widespread resident of subalpine forests as far south as New Mexico. It more or less replaces its smaller congener, the Northern Saw-whet Owl, at higher elevations and latitudes; the two species can be distinguished by the spotted crown and charcoal cheeks of the Boreal Owl versus the striped crown and brownish cheeks of the Saw-whet. The staccato whistles of the Boreal Owl's territorial call are more similar to the sound of winnowing snipe than they are to the monotonous toots of the Saw-whet.

Distribution, Abundance, and Habitat The Boreal Owl is resident in suitable habitats throughout the British Columbian interior west to the eastern edges of the Coast Mountains, but is absent as a breeder from the Georgia Depression and Coast and Mountains ecoprovinces. The general pattern of distribution is similar to that known when The Birds of British Columbia was published in 1990. The Probability of Observation model indicates that it is easiest to find in the Northern Boreal Mountains ecoprovince.

In British Columbia, Boreal Owls generally breed in older stands of spruce (Picea species) and Subalpine Fir (Abies lasiocarpa), often in association with Trembling Aspen (Populus tremuloides) or Lodgepole Pine (Pinus contorta) (Campbell et al. 1990, Hayward and Hayward 1993). They nest in tree cavities, usually those built by Pileated Woodpeckers or Northern Flickers, but will readily use nest boxes as well (Hayward and Hayward 1993). In the southern third of British Columbia, breeding territories are generally above 1,500 m elevation; this limit drops with increasing latitude so that in the northern half of the province, Boreal Owls can be found down into valley bottoms.

Conservation and Recommendations Boreal Owl populations are considered secure in British Columbia and across Canada, but there are no suitable data to assess population trends with any precision (Environment Canada 2011). Clearcut logging almost certainly reduces habitat availability, since it removes nesting sites, roosting habitat and lowers population of preferred prey (Hayward and Hayward 1993). Nest boxes can be used to enhance sites where snags have been lost through forest harvest. Nocturnal owl surveys will become important sources of information on the population status of this species as the datasets they generate attain a suitably long time series.