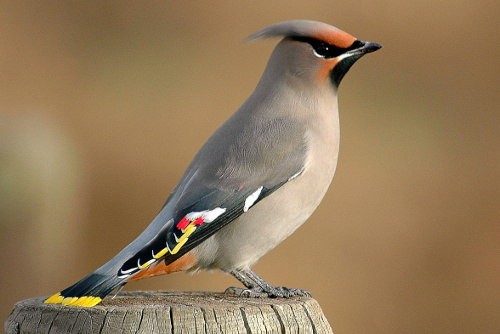 Characteristics and Range Waxwings are unusual among passerines in that they do not defend territories, and so have not developed songs. This may be because their abundant and short lived food supplies, mainly fruits, cannot be easily defended. The waxy tips to the secondary (inner) wing feathers that give rise to the name, and the bright yellow tail band and wing markings, are formed from these dietary sources, and play a function in reproductive success; older birds with brighter carotenoid pigments fledge more young (Witmer 2002). The Bohemian Waxwing breeds in northern boreal and taiga habitats from northern Europe to Siberia, and across western North America, where some birds also breed in subalpine forests extending south to the Cascade and northern Rocky mountains. In winter, Bohemain Waxwings form large flocks that range nomadically south in response to food supplies, but remain in the northern halves of North America and Eurasia.

Distribution, Abundance, and Habitat This waxwing is quite widely distributed across the plateaus and higher mountain ranges of northern British Columbia, but is much more sparsely and irregularly distributed farther south. This distribution has not changed appreciably since The Birds of British Columbia was published in 2001. The Atlas again confirmed breeding in the far southeast of the province, this time in the Purcell Mountains.

The Atlas Probability of Observation model clearly indicates the Northern Boreal Mountains is the ecoprovince where the species is most likely to be widely found, but point counts indicate that abundance is similar in the Sub-Boreal Interior, though sample sizes are low. Within these areas, it prefers elevations below 1,250 m in the Boreal White and Black Spruce, and Sub-boreal Spruce biogeoclimatic zones.

Conservation and Recommendations There are no major conservation concerns for Bohemian Waxwing. Trends are measured from Christmas Bird Count data, albeit with low reliability; the data suggest a long-term decrease, perhaps due to a northward shift in the wintering range (Environment Canada 2011). Its breeding biology is poorly known.