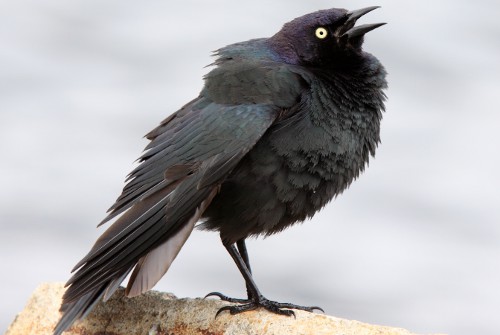 Characteristics and Range The Brewer's Blackbird, once an inhabitant of short-grass western plains and the edges of open wetlands, has taken advantage of the European settlement of North America and expanded its range eastwards and northwards over the past century; it is now a familiar and conspicuous bird of agricultural areas and even backyards. Its range spans central, western and southeastern North America. It is a partial migrant, with populations breeding in more northern continental areas migrating south or toward the coast to winter (Martin 2002). The species nests colonially. Post-breeding flocks gather in mid-summer and often appear in semi-urban areas, even parking lots around small towns. As autumn progresses, Brewer's Blackbirds join Red-winged Blackbirds, Yellow-headed Blackbirds, European Starlings, and crows in foraging around grain fields, livestock and wetland edges.

Distribution, Abundance, and Habitat The Brewer's Blackbird is most widely distributed across lowland and mid-elevation plateaus, river basins and valley systems of southern interior, coastal southwest, and northeastern parts of the province. This distribution has changed little since The Birds of British Columbia was published in 2001, and is mirrored by the Probability of Observation model, which highlights the Okanagan, Similkameen, Thompson, Nicola, Fraser, Chilcotin and Peace river systems as being the most likely places to find the species.

Atlas point counts combined with the PObs results show that the main centres of abundance are still the Southern Interior and Georgia Depression ecoprovinces, as noted by Campbell et al. (2001), but that Brewer's Blackbird is equally abundant within its more restricted range in the Central Interior and Southern Interior Mountains ecoprovinces. It prefers elevations between 250 and 750 m, where it is 2-4 times more common than at elevations immediately above or below this range.

Brewer's Blackbird is native to open country such as sagebrush (Artemisia species) grasslands, but has adapted well to lower elevation human agricultural settings, open suburbia, and transportation corridors to the point where most British Columbia Populations are now found in these human-altered habitats. Heavily forested regions like the Coast and northern Rocky mountains are only inhabited by Brewer's Blackbird at lower elevations where human activity has opened up the landscape, such as along transportation corridors, grassy roadsides, and in hayfields, pastures and clearings.

Conservation and Recommendations The Brewer's Blackbird is not considered at risk, although long-term declines have been detected across Canada and in British Columbia by Breeding Bird Surveys. If the Common Grackle's range continues to expand in British Columbia, the possibility of competitive exclusion in urban and suburban habitats should be investigated, as occurs in at least one area of overlap between these two species farther south (Martin 2002).