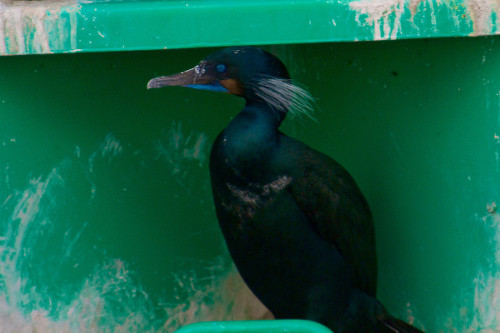 Characteristics and Range Brandt's Cormorant is a medium-sized cormorant that inhabits coastal marine and estuarine waters of the California Current upwelling system, and reaches the northern limits of its breeding range in British Columbia Individuals disperse widely in winter, from Baja California to the Gulf of Alaska. Identified by its blue gular pouch, the species often forages in association with kelp beds, feeding on surface- to bottom-dwelling fish (Wallace and Wallace 1998).

Distribution, Abundance, and Habitat In British Columbia, Brandt's Cormorant is known to have bred at only a handful of sites around Vancouver Island (Campbell et al. 1990). Breeding was not confirmed anywhere during the Atlas survey period, but in 2013, the species was recorded breeding on Mandarte Island in the southern Gulf Islands (Carter et al. 2014), where flocks were recorded in August and September during the Atlas surveys (Davidson et al. 2010).

Cormorants as a group are notoriously difficult to census because breeding colonies can be small, they are often located on remote islands, and their locations can shift from one year to the next. In the case of Brandt's Cormorants, the very small and ephemeral breeding population in British Columbia adds to the difficulty of obtaining reliable census data.

Brandt's Cormorants use both inshore marine and estuarine waters. At breeding colonies in British Columbia, the Brandt's Cormorant nests on the shoulders or tops of rocky islands, and often in protected sites on the leeward side of an island (Campbell et al. 1990).

Conservation and Recommendations The species is Red-Listed by the province on account of its small breeding population. Recent surveys suggest that Brandt's Cormorant has declined as a breeding species in British Columbia in recent years, with relatively few confirmed breeding records (Carter et al. 2014). The species is potentially vulnerable to oil spills and entanglement in fishing nets, as well as disturbance and predation from Bald Eagles (Hipfner et al. 2012).