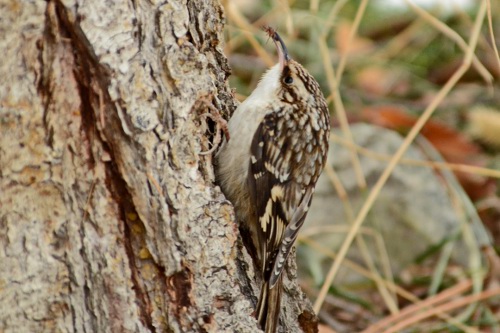 Characteristics and Range Cryptic and some might suggest cute, the Brown Creeper is easily overlooked. However, its tame nature and habit of gleaning along the lower portions of tree trunks can make for some intimate, eye-level encounters. Widely distributed across the forested regions of North America, and patchily in Central America, it is a year-round resident, but typically makes altitudinal and short southern migrations during cold winters (Hejl et al. 2002).

Distribution, Abundance, and Habitat The Brown Creeper is quite widely distributed across much of southern and central British Columbia, but occurs more sparsely in the north. The Atlas recorded few confirmed breeding records anywhere, likely due to the bird's cryptic nature. Breeding is likely more frequent and widespread than currently documented. There may have been small changes in the known breeding distribution of Brown Creeper since The Birds of British Columbia was published in 1997, including confirmed breeding along the central coast, on northern Vancouver Island, and at the head of inlets on the north coast. The Atlas failed to find Brown Creepers in the Haines Triangle, in the far northwest, although the species was documented there previously (Campbell et al. 1997).

The main centre of abundance for the Brown Creeper is the Georgia Depression and Coast and Mountains ecoprovinces including Haida Gwaii, where the Probability of Observation model indicates the bird was most likely to be found, and the highest abundances were recorded on point counts. Abundance is five times higher below 250 m than above that elevation, and the bird is most common in the Coastal Douglas-fir biogeoclimatic zone, followed by Coastal Western Hemlock. Atlas point count data also suggest a moderate local abundance on the Liard Plateau in the far north.

The Brown Creeper generally prefers mature and old conifer-dominant forests, although it can occur in deciduous forest types, and does well in suburban areas where mature gardens and retained veteran trees provide suitable habitat. It is thought to be a forest interior associate that requires larger trees with thickly furrowed and loose sloughing bark, that it nests behind and forages among (Hejl et al. 2002). It also uses artificial nest sites, particularly those made from large pieces of bark. Elevation distribution differs markedly between the coast (0-650 m) and interior regions (290-2,340 m).

Conservation and Recommendations The Province of British Columbia has a high responsibility for Brown Creeper conservation. Coastal Douglas-fir, the Brown Creeper's favoured climate-vegetation type, is already small in area and undergoing further reductions in quality and extent (Schuster and Arcese 2011). In British Columbia, harvesting of mature stands and cutting of large, dead or dying trees for firewood likely have an impact on local populations. In the interior, these forestry practices may have had a greater impact on numbers. Modifying forest harvest practices based on studies in the interior of British Columbia (e.g. Mahon et al. 2008), may benefit foraging and nesting habitat management for the species. As suburban trees age they become useful for this species, so local government policies that safely retain old and decaying trees in such areas are encouraged.