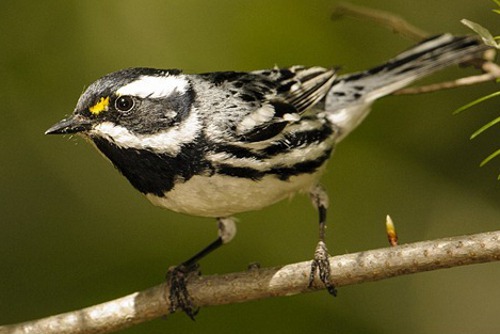 Characteristics and Range This elegant black, white, and grey warbler is striking and easily identified. It breeds west of the Rocky Mountains from southwestern British Columbia to the northern Sierra Madre and northern Baja California in far northern Mexico (Guzy and Lowther 2012). A short- to medium-distance migrant, it winters chiefly in southern Baja California, and on the Pacific slope and in the interior of central Mexico; some winter further north in the southwestern United States.

Distribution, Abundance, and Habitat The Black-throated Gray Warbler breeds widely across southwestern British Columbia, mostly confined to the southern Northern Pacific Rainforest Bird Conservation Region south of 51°N. The species was scarce or irregular a century ago on the east coast of Vancouver Island, but is now well established. The Atlas greatly expanded the confirmed breeding distribution. Campbell et al. (2001) noted that there were scattered non-breeding records as far north as the north coast of British Columbia, and the Atlas confirmed breeding north of 54°N, along the Skeena River.

The most extensive areas of highest Probability of Observation are in the Georgia Depression and southern Coast and Mountains ecoprovinces, matching the distribution data. Highest abundance is also in these areas, within the Coastal Douglas-fir and Coastal Western Hemlock biogeoclimatic zones, below 250 m elevation, above which abundance tails off gradually to 1,000 m. Open coniferous or mixed coniferous-deciduous woodland with brushy undergrowth are preferred breeding habitats. There has been no major change in the centre of breeding abundance in the province since 1970 (Environment Canada 2013).

Conservation and Recommendations Trends in the northern part of the Black-throated Gray Warbler's breeding range appear to be generally stable and there are no known conservation concerns for the species, although its biology is poorly known.