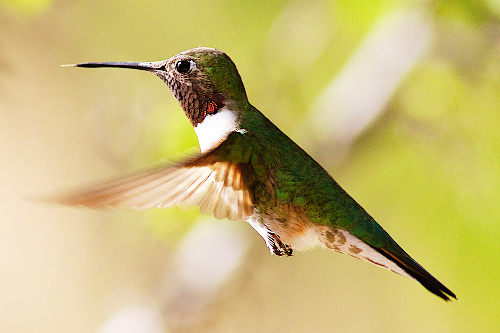 Characteristics and Range During the breeding season, male Broad-tailed Hummingbirds are often heard before they are seen, because they produce a high-pitched modulated trill while they fly, which is the result of having a modified 10th primary feather. The Broad-tailed Hummingbird breeds in the central and southern Rocky Mountains and at higher elevations from the southern Great Basin south to Guatemala. Then northernmost breeding location is are at least 300 km south of British Columbia in Montana (Montana Natural Heritage Program 2015), and it may have bred farther west in eastern Oregon and Idaho, but there are no recent nest records there, and no northward range expansion is being reported (Camfield et al. 2013).

Distribution, Abundance, and Habitat In British Columbia, the Broad-tailed Hummingbird is regarded as an accidental or vagrant species, first recorded in the province in 1997 (Campbell et al. 2001). An Atlas participant found one individual in late June in the Kootenay River valley in the Southern Interior Mountains Ecoprovince. One other record from the Atlas period, submitted to eBird, is also from the Southern Interior Mountains: a female near the Blaeberry River in the upper Columbia River catchment. There is no evidence of breeding for this species in British Columbia, hence the Atlas records are coded X and do not appear on the distribution map.

Conservation and Recommendations Records should continue to be submitted to programs like eBird and periodically evaluated for any change in this species status.