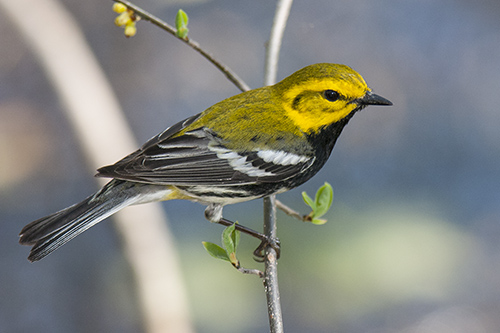 Characteristics and Range This brightly-coloured warbler is the eastern representative of a 'superspecies' that includes the Golden-cheeked, Hermit, Townsend's and probably Black-throated Gray Warblers (Morse and Poole 2005). The Black-throated Green Warbler is found in northern temperate and southern boreal forests from the Atlantic Coast west to the Rocky Mountains. It is also occurs at higher elevations southward through the Appalachian Mountains, and a separate subspecies breeds in coastal swamps of the southeastern United States. It winters mainly in eastern Mexico, Central America and the West Indies.

Distribution, Abundance, and Habitat The Black-throated Green Warbler is found primarily in the Peace River watershed of the Boreal Plains Ecoprovince, and adjacent Sub-Boreal Interior Ecoprovince where tributaries penetrate the Rocky Mountain foothills. Its breeding range has expanded westwards in recent decades, since the first record at Moberly Lake in 1965 (Salt 1966). By the time The Birds of British Columbia was published in 2001, it was considered uncommon in the Boreal Plains. Atlas records show that the westward expansion has continued since then, but it appears to be largely absent from the Taiga Plains Ecoprovince.

The highest abundance and Probability of Observation values are in the Boreal Plains Ecoprovince, where the species is locally common between 250 and 1,000 m elevation. In British Columbia, the Black-throated Green Warbler prefers old, mixed wood forests, especially a combination of White Spruce (Picea glauca) and Trembling Aspen (Populus tremuloides), generally at least 80 years old (Preston et al. 2007). Lesser numbers are found in stands with other tree species combinations that may include Lodgepole Pine (Pinus contorta), Balsam Poplar (Populus balsamifera) and Black Cottonwood (Populus trichocarpa). In British Columbia, the species is often described as being restricted to riparian habitats, where large spruce and poplars often grow (e.g., Cooper 1997) but this perception has since been disproved (Phinney 2003). Occupied stands in British Columbia are older than most stands used farther east (Mark Phinney pers. Obs.).

Conservation and Recommendations In addition to being Blue-listed in British Columbia, the Black-throated Green Warbler is also listed as a Species at Risk under the British Columbia Forest and Range Practices Act. Under the latter several protected Wildlife Habitat Areas have been established for the species in the Dawson Creek Timber Supply Area. Available habitat is likely to decline in the future, since the planned rotation age of managed forests is younger than age of stands typically occupied. Even if the birds adapt to younger forest, government reforestation policy currently prevents the re-establishment of its preferred mixed stands, limiting future Black-throated Green Warbler habitat to the interface of pure coniferous and deciduous stand types (Phinney 2003).

As the Black-throated Green Warbler expanded westward, contact and hybridization with Townsend's Warbler has occurred along the eastern foothills of the Rocky Mountains (Toews et al. 2011). Warblers in the contact zone can look and sound like either parent species, or some combination of the two, and birds outside the known range of either species could be hybrids. The Atlas records from the far north (west of Fort Nelson River) are within the documented range of Townsend's Warbler. Additional study could determine whether a second contact zone exists in this area.