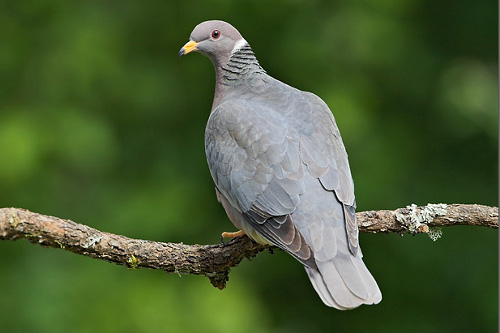 Characteristics and Range North America's largest native pigeon, this bird has long been a focus of managed sport and market hunting. Low harvest limits and hunting closures across large parts of its range have not, however, halted a widespread, long-term decline. The Band-tailed Pigeon is found in moister forests along the Pacific Coast from the Alaska Panhandle to Baja, and in drier montane forests from the Sierra Nevada to South America (Keppie and Braun 2000). It is a partial migrant; some of the North Pacific (including British Columbian) birds migrate to California, but others now overwinter in the mild southwestern corner of British Columbia, having once been summer visitors only (Campbell et al. 1990).

Distribution, Abundance, and Habitat Atlas records showed the species to be similarly widespread in coastal regions as was known when The Birds of British Columbia was published in 1990, but more sparsely distributed in the interior. Here, Atlas records are restricted to areas west of the Fraser River and the western slope of the Cascade Mountains. These results suggest that the slow eastward expansion noted by Campbell et al. (1990) has reversed, but the slow northward expansion could still be occurring.

The core of the provincial population remains in the Georgia Depression and adjacent southern Coast and Mountains ecoprovinces, with the main clusters in distribution, highest Probability of Observation values, and highest abundance on point counts. Band-tailed Pigeons are most common below elevations of 250 m, and in the Coastal Western Hemlock and Coastal Douglas-fir biogeoclimatic zones. The bird's tendency to form large flocks means there is a lot of variation around average abundance values.

The species uses a variety of conifer and mixed deciduous forests with an understorey of fruiting shrubs, and has adapted to suburban and agricultural environments with sufficient tree cover, where grains and exotic fruiting shrubs supplement natural sources of food. It regularly uses mineral sites and gritting areas to supplement sodium (Sanders and Jarvis 2000) and possibly calcium required during the breeding season.

Conservation and Recommendations The large decrease in the Band-tailed Pigeon population prompted its Special Concern status under the Species at Risk Act. Despite low harvest levels in Canada since the 1990s, that decline appears to be continuing. It is dependent on isolated mineral sites mainly located on private property and largely unprotected, so disturbance at these sites may be impacting its ability to acquire essential minerals (COSEWIC 2008); in Oregon, mineral site use is significantly higher in landscapes with higher forest cover and conservation stewardship (Overton et al. 2006). Logging may negatively affect habitat structure by creating dense second-growth forests with few berry-producing shrubs (COSEWIC 2008).