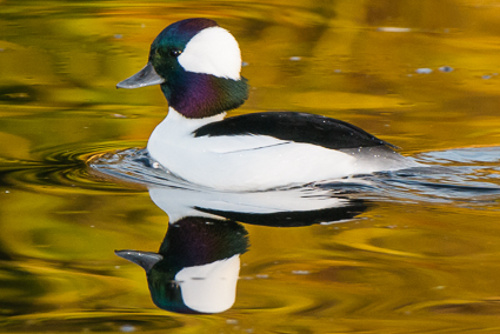 Characteristics and Range The Bufflehead is the smallest diving duck in North America. Unlike most cavity-nesting ducks that generally use larger nest holes excavated by the Pileated Woodpecker, the Bufflehead almost exclusively uses smaller Northern Flicker holes for nesting (Gauthier 2014). In contrast to most ducks, Bufflehead pairs are typically monogamous and can be relatively long-lived, surviving up to 18 years in the wild (Cornell Lab of Ornithology 2014). The Bufflehead breeds throughout the Boreal Forest and south in higher elevation forests to the Cascade and northern Rocky mountains, but is mostly absent from areas along either coast. It winters in protected coastal waters and inland across the southern half of the continent, including the entire British Columbia coast and on open water in the southern interior (Campbell et al. 1990).

Distribution, Abundance, and Habitat The Bufflehead breeds throughout the province, except for coastal areas and most of the Coast Mountains Ecoprovince. Campbell et al. (1990) showed breeding records for Vancouver Island and the lower Fraser Valley, but Atlas work recorded no confirmed breeding for these areas.

The areas with the most extensive high Probability of Observation for Buffleheads are the lowland and mid-elevation plateau regions of the Taiga Plains, Boreal Plans and Central Interior ecoprovinces. Additional areas with high PObs values are the Rocky Mountain Trench portion of the Southern Interior Mountains Ecoprovince, and the lower Thompson drainage of the Southern Interior Ecoprovince. Abundance was highest in the Central Interior Ecoprovince, and at lower (250-500 m) elevations. However, this is based on a relatively small sample of randomized point counts that did not comprehensively sample the Bufflehead's wetland habitat, which is concentrated in the Boreal White and Black Spruce, Sub-boreal Pine-Spruce, and Interior Douglas-fir biogeclimatic zones.

In British Columbia, the Bufflehead nests primarily on lakes and occasionally on rivers, sloughs and ponds in aspen parkland, interior coniferous forests, and farmlands (Campbell et al. 1990). Most nests are built in abandoned Northern Flicker nest holes, mainly in Trembling Aspen (Populus tremuloides), Douglas-fir (Pseudotsuga menziesii), and pine (Pinus) trees. Areas with highest Bufflehead Pobs values generally match high Northern Flicker Pobs values. The majority of nests are located near wetland edges, but some may be up to 200 m from water. Buffleheads will use nest boxes, but not as readily as other cavity-nesting duck species. Interestingly, natural nest cavity entrances used by Bufflehead tend not to face towards the water (Gauthier 2014).

Conservation and Recommendations Bufflehead populations are increasing both in British Columbia and across Canada based on Breeding Bird Survey data (Environment Canada 2014). Nest holes created by the Northern Flicker are generally more common across the landscape than larger Pileated Woodpecker nest cavities used by larger cavity-nesting duck species; so nest sites are not usually a limiting factor.