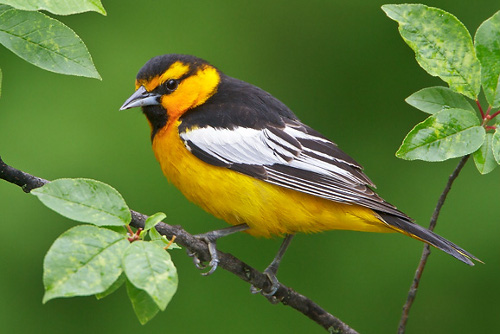 Characteristics and Range The adult male Bullock's Oriole is one of British Columbia's most brightly coloured songbirds, sporting a flashy orange body with black upperparts, an orange-and-black tail, and white wing flashes. The drabber female is various tones of grey and yellow. She builds a hanging purse-like nest in tall shade trees and riparian woodland edges across much of the lower open country of southern British Columbia. The Bullock's Oriole is only found in North America, where it breeds in western biomes and winters in western Mexico (Rising and Williams 1999).

Because of hybridization with the Baltimore Oriole along a contact zone in the Great Plains, the Bullock's Oriole was lumped with the Baltimore Oriole as one species, the Northern Oriole (Icterus galbula), from 1983-1995 (American Ornithologists Union 1983). However subsequent studies revealed that hybrids often reverted to parental types and the zone of hybridization was not growing. As a result the Baltimore and Bullock's orioles were re-split into separate species in 1995 (Munroe et al. 1995).

Distribution, Abundance, and Habitat Formerly a bird only of the southern interior, from 1950 to 1970 the Bullock's Oriole extended its range westwards from the Okanagan and Thompson river valleys to include the Fraser Valley west to southeast Vancouver Island, and northwards along interior river valleys (Campbell et al. 2001). The Atlas shows the Bullock's Oriole's northwards range expansion has continued, slowly spreading along river valleys across the central interior plateaus and north along the Rocky Mountain Trench.

The Bullock's Oriole is most likely to be found at lower elevations in the valley systems of the Southern Interior Ecoprovince, which remains the centre of its provincial abundance (Campbell et al. 2001). Atlas point counts show that it is most abundant between 250 and 500 m, and in the Bunchgrass, Ponderosa Pine, and Interior Douglas-fir biogeoclimatic zones. Probabilities of Observation are lower in the lowlands and river valleys of the Southern Interior Mountains, Central Interior and Georgia Depression ecoprovinces, but point count data suggest a locally high abundance in the Coastal Western Hemlock biogeoclimatic zone in the lower Fraser River valley.

Conservation and Recommendations The Bullock's Oriole is not considered at risk, showing increasing trends in provincial and national Breeding Bird Survey results.