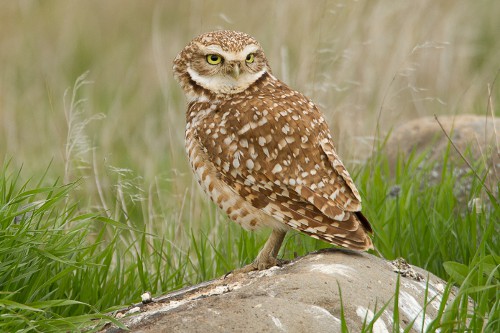 Characteristics and Range The Burrowing Owl is a small, long-legged owl with yellow eyes, white eyebrows and a white throat, which is active during the day when it is often seen perched on the ground or on fence posts. It preys mainly on small mammals (mostly voles) and large insects (mostly grasshoppers and beetles); however, it also takes small birds, amphibians and reptiles. It occurs in the Prairie, Great Basin and Southwest regions of North America, on the Florida peninsula and into parts of the Caribbean, and patchily south to Tierra del Fuego at the southern tip of South America (Poulin et al. 2011).

Distribution, Abundance, and Habitat In British Columbia, it is a rare breeder at reintroduction sites in the Thompson, Nicola and Okanagan Valleys. Atlas surveyors confirmed that breeding continues at these sites, and also observed possible breeding evidence near Cache Creek and in the East Kootenays. Historically, a few bred in the Lower Mainland, from where it is now extirpated (Campbell et al. 1990b).

The Burrowing Owl breeds semi-colonially in dry, open, grasslands, plains, and deserts. It nests in abandoned underground burrows of ground squirrels, prairie dogs, marmots, and other fossorial animals, and in man-made burrows. In British Columbia, it is primarily restricted to the Bunchgrass biogeoclimatic zone in the Southern Interior Ecoprovince (British Columbia Ministry of Environment 2014).

Conservation and Recommendations Designated Endangered nationally under the Species at Risk Act, and Red-listed provincially, the Burrowing Owl is also one of only four species to be designated as Endangered under the British Columbia Wildlife Act. Within Canada, this owl occupies only 36% of its former range; threats include loss and fragmentation of habitat, decreased prey and increased predation, environmental contaminants, collisions with vehicles, and loss of fossorial mammals (Environment Canada 2012). British Columbia's population was considered extirpated in the late 1970s and a reintroduction program was initiated in 1983. This began with translocations from Washington, but evolved into a captive-breeding release program from 1992 onwards (Blood and Low 1998). In recent years, around 100 captive-bred birds have been released to artificial burrows each spring; many stay to breed, with up to 261 wild-bred young being produced and banded annually. While some birds remain and overwinter, and several birds return to breed in subsequent years, the provincial population is not yet considered self-sustaining (Environment Canada 2012).

Captive-breeding release programs should be continued and expanded in suitable habitats. Further searches could be made of locations near Cache Creek and in the East Kootenay where possible breeding evidence was observed by atlassers. All evidence of breeding away from release sites should be submitted to the British Columbia Conservation Data Centre.