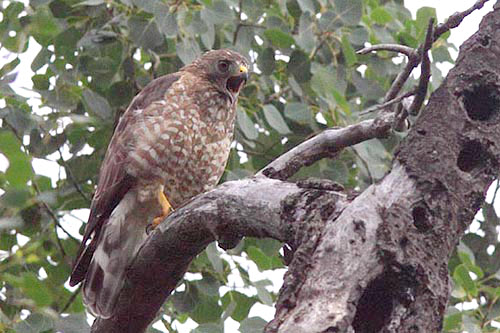 Characteristics and Range This crow-sized hawk is British Columbia's smallest Buteo. It is primarily a bird of forested landscapes, where it can be seen around edges and openings watching for the reptiles, amphibians, small mammals, birds, and insects on which it preys. A perched hawk may be easily overlooked, but upon taking flight, the boldly-patterned black-and-white barred tail of an adult is distinctive. A high-pitched "pit-seeee" call may be given, especially near the nest site. The Broad-winged Hawk breeds in temperate and southern boreal forests across eastern North America, westward in a narrow band north of the Great Plains to the Rocky Mountain foothills. It migrates in flocks to its winter range from Mexico's Pacific Slope to central South America (Goodrich et al. 2014).

Distribution, Abundance, and Habitat Within British Columbia, it is found primarily east of the Rocky Mountains, in the Boreal and Taiga Plains. However, a significant number of records - and confirmation of breeding - were also reported from the Sub-Boreal Interior and Southern Interior Mountains ecoprovinces. This represents a clear westward range expansion in recent decades (Campbell et al. 1990).

Although the Broad-winged Hawk is well known for congregating in large kettles during migration, it is surprisingly secretive on the breeding grounds, and the Probability of Observation is very low even in areas with clusters of breeding records, in the central and northeastern parts of the province in White and Black Spruce and Sub-Boreal Spruce biogeoclimatic zones, at elevations between 300 and 900 m. This hawk's sparse distribution and preference for forested habitats prevent an accurate population estimate, but in 2005 there were likely fewer than 250 breeding birds in the province (Manning and Cooper 2005). Atlas data suggest an increasing trend.

In British Columbia, the Broad-winged Hawk is found primarily in mature deciduous and mixed wood forests, particularly stands containing Trembling Aspen (Populus tremuloides), similar to habitat occupied throughout its range. Stand edges and openings are used for hunting, often with water bodies nearby.

Conservation and Recommendations The Broad-winged Hawk is not at risk in Canada, and Breeding Bird Survey data suggest a slightly increasing population trend across the country including the Boreal Taiga Plains. Nevertheless, it is Blue-Listed in British Columbia, primarily due to the low numbers and restricted range in the province. In neighbouring Alberta it is considered 'Sensitive' to human activities or natural events (AESRD 2012). Its requirement for mature forest stands inevitably clashes with industrial and agricultural development in forested landscapes, and potential nesting habitat is lost every year. However, this species is seemingly more tolerant of partial forest clearing than other woodland hawks, and may accept some man-made openings in the breeding territory (Goodrich et al. 2014). Due to their rarity, known nesting locations should be protected as practical, and monitored for continued use and tolerance of human activity and habitat alteration.