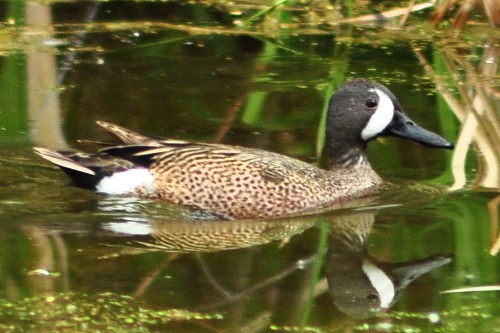 Characteristics and Range The male of this small dabbling duck, with a large blue patch on the upper wing and a grayish head with large white crescent in front of eye, is easily recognised. It breeds over a large portion of North America south of the treeline from Alaska to the central Atlantic coast south to the Gulf Coast (Johnsgard 2010, Rohwer et al. 2002). Highest breeding densities occur in the mixed-grass prairie and parklands of central North America. A long-distance migrant, it winters from extreme southern United States south throughout Central America and the Caribbean, and throughout much of South America.

Distribution, Abundance, and Habitat The Blue-winged Teal is a common migrant and summer visitor in the British Columbia interior and southern inner coast (Campbell et al. 1990); during the Atlas period it was most widespread in the central-southern interior and the northeast, with a localised cluster of records in the lower Fraser Valley. The Atlas results confirmed breeding along the Stikine River, a region where it was not reported in The Birds of British Columbia; this was likely due to increased effort. Most nesting is below about 1,250 m.

The highest Probabilities of Observation are across the extensive plateau wetland and lake complexes of the Central Interior Ecoprovince; and in the Boreal Plains Ecoprovince, which is the westernmost extension of the highly productive Great Plains breeding area. Too few data were collected to make Atlas-based inferences on abundance, but the PObs values are probably an accurate indicator of the pattern of abundance.

The Blue-winged Teal's preferred breeding habitats are shallow marshes, sloughs, and wetlands in prairie grasslands and short-grass plains, with some coastal nesting in wet meadows near tidal ponds or creeks.

Conservation and Recommendations There are insufficient data to show any trends in the British Columbia breeding population, but it is one of the freshwater wetland birds that has benefitted from wetland conservation management (NABCI-Canada 2012), and there are no overall conservation concerns for this continentally abundant species.