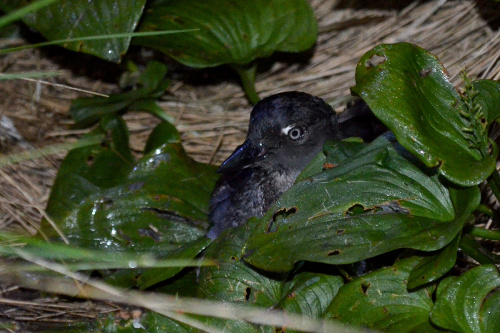 Characteristics and Range The Cassin's Auklet is the most abundant breeding seabird in British Columbia - the province supports an estimated 70% of the global population. It breeds from Baja California to the western Aleutians (Ainley et al. 2011); in winter, the bulk of the population moves down the Pacific Coast, residing along and offshore from the continental shelf south to Baja. A small, colonial, nocturnal and zooplanktivorous auk, this grey-and-white seabird usually nests in burrows it excavates in deep soil, though it will also nest in rock crevices and under logs. Silent during the day, breeding colonies are noisy places at night: Cassin's Auklet calls have been compared to a creaking, rusty gate, a squealing pig, and collectively, to a frog pond in full chorus.

Distribution, Abundance, and Habitat Breeding colonies are widely distributed on islands in continental shelf waters from the west coast of Vancouver Island to the Haida Gwaii archipelago, with small numbers off the central coast (Rodway 1991). The largest colonies in the world, consisting of hundreds of thousands of pairs, are on the outer Scott Islands. The species is common on the sea off British Columbia's coasts during summer, even seaward of the continental shelf.

Breeding islands are scattered and remote and, outside of Gwaii Haanas National Park Reserve and Haida Heritage Site, unlikely to have human visitors. There are 15 island groups designated as Important Bird Areas in British Columbia that support breeding colonies of Cassin's Auklets (IBA Canada 2015); however, due to their remoteness, very few were visited during the Atlas period.

The Cassin's Auklet breeds both on forested and non-forested islands, under canopy and in the open, and mainly on steep vegetated slopes. At Triangle Island, the largest colony in B.C, the Cassin's Auklet breeds at highest density in areas covered by Tufted Hairgrass (Deschampsia cespitosa), while avoiding areas covered by Salmonberry (Rubus spectabilis) (Vermeer et al. 1979). It forages in deep ocean water, both on and seaward of the continental shelf break.

Conservation and Recommendations Cassin's Auklet is vulnerable to introduced mammalian predators; several colonies in British Columbia have been exterminated by rats (Rattus species), Raccoons (Procyon lotor) and American Mink (Neovison vison) that were either introduced accidentally to the islands as ship's stowaways, or intentionally for the fur trade. It may be vulnerable to future effects of climate change, as breeding success and adult survival rates are reduced during warm-water events such as El Nińo (Morrison et al. 2011). Loss of breeding habitat as a result of vegetation changes (loss of Tufted Hairgrass and increases in Salmonberry Rubus spectabilis cover) on major colonies is also a concern (Hipfner et al. 2010). These issues led the species to be listed by COSEWIC as Special Concern (COSEWIC 2014).