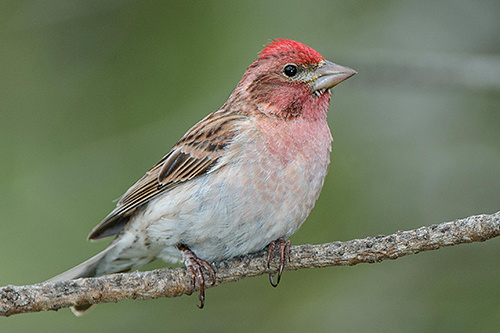 Characteristics and Range The Cassin's Finch is very similar in appearance to the more widespread Purple Finch, differing primarily in the bright scarlet crown of the Cassin's male and the streaked undertail coverts of the female. The male Cassin's has a remarkable ability to mimic other songbirds, incorporating their sounds into his bright warble so accurately that birders may be left searching for a non-existent bird (Hahn 1996). The year-round range of this species extends from British Columbia south through the inland parts of the western cordillera to about 37°N; some birds winter further south to central Mexico. Cannings et al. (1987) noted that the bulk of the Okanagan population is migratory, with year to year variation in the number of overwintering birds dependent on the local abundance of Ponderosa Pine (Pinus ponderosa) seeds.

Distribution, Abundance, and Habitat Both the Atlas and The Birds of British Columbia show that the breeding range of the Cassin's Finch includes the relatively dry plateaus of the Southern Interior and Central Interior ecoprovinces north to Quesnel Lake, and the most southerly valleys of the Southern Interior Mountains Ecoprovince. Campbell et al. (2001) and Hahn (1996) cite evidence of northerly expansion of the summer range of Cassin's Finch since the mid-20th Century, but the continuation of this trend is not apparent from the Atlas results.

Probability of Observation data indicate that the likelihood of seeing this finch is moderate in the Southern Interior Ecoprovince and in the valleys of the southern Rocky and Columbia mountains. Campbell et al. (2001) reported maximum numbers of this species in the Southern Interior Ecoprovince, and this is corroborated by the Atlas abundance records.

The breeding range of this tree-nesting species encompasses the driest parts of the province. It includes relatively open treed areas (deciduous, coniferous, riparian woodlands) at low to moderately high elevations in the interior valleys, where abundance reaches its maximum at 500 - 750 m. This finch also nests in farmland and other human-modified habitats with suitable nest-trees. Point count data for biogeoclimatic zones indicate that the Cassin's Finch uses Ponderosa Pine and Bunchgrass parkland, but prefers to nest in Interior Douglas-fir. It was found, and is locally abundant, throughout the elevational range of these dry forests, and in adjacent parts of the Montane Spruce zone, where it occupies open forest rather than dense stands.

Conservation and Recommendations Breeding Bird Survey data suggest a long-term population decline, but this estimate is imprecise due to annual fluctuations in numbers. The provincial status of the Cassin's Finch is "secure". Forestry practices at higher elevations could benefit this species: Hahn (1996) noted that selective logging or small clear-cuts may improve breeding habitat.