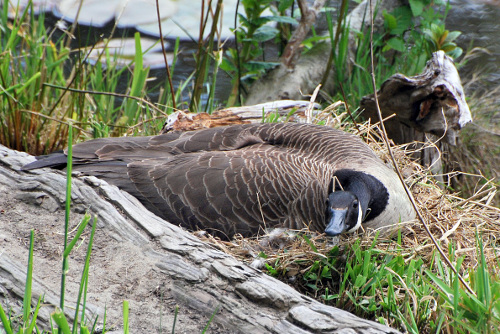 Characteristics and Range The Canada Goose is a familiar and widespread goose with a black head and neck, white cheek patches, light tan to cream breast, and brown back. It breeds as isolated pairs or in localized aggregations over an extremely wide range of habitats across North America from arctic tundra south through northern and temperate forests and grasslands to about 35°N, and in western Greenland. It winters from southeast Alaska and southern Canada south to northern Mexico and the West Indies. It is introduced and established in many other parts of the world (Mowbray et al. 2002).

Distribution, Abundance, and Habitat The Canada Goose is a widespread, lower elevation nester across the southern two-thirds of British Columbia. During the 1940s, it was mainly a migrant and summer visitor; however, over the past 40+ years, large resident populations have established locally (Campbell et al. 1990; Dawe and Stewart 2010). The majority of the resident population is concentrated in urban and suburban areas of southern British Columbia. These resident populations are from introductions of mixed subspecies and are multi-race hybrids (Campbell et al. 1990; Dawe and Stewart 2010).

The most extensive areas of high Probability of Observation are in the Central Interior and Georgia Depression ecoprovinces, but the maximum Pobs values are in coastal and valley bottom areas of the Coast and Mountains Ecoprovince. Pobs values are generally lower in the northern ecoprovinces, perhaps because of the reduced influence of introduced populations. Abundance is higher below 500 m compared to higher elevations but point counts are not the best technique for assessing abundance of waterfowl. Canada Goose populations in coastal and interior British Columbia have more than doubled since 1970 (NABCI-Canada 2012).

The Canada Goose is one of the most adaptable of waterfowl and nests in a wide variety of habitats, from forest to open grasslands, and rugged terrain to flat plains, as long as there is permanent water nearby. It often nests in large raptor (eagle and osprey) nests, on other natural platforms, and on man-made structures.

Little is known of the distribution and abundance of the Vancouver Canada Goose and potential interactions with the expanding populations of the resident Canada Goose. Studies are needed to assess the status of this subspecies.