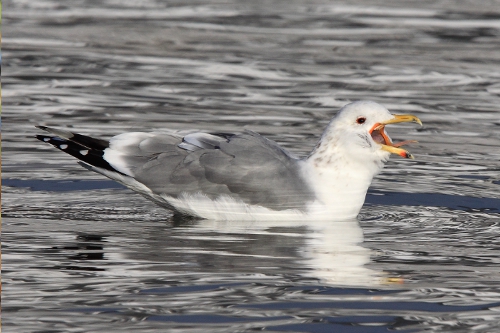 Characteristics and Range The California Gull is a highly colonial, inland-breeding gull that rarely hybridizes with other white-headed gulls. It breeds wherever it can find suitable wetland habitat in the Prairies and adjacent Boreal Forest, and some of North America's western basins. There are 70+ colonies numbering 200,000-300,000 birds (the largest exceeding 20,000 birds) in the Canadian Prairies and Boreal Forest of Alberta and Saskatchewan (Environment Canada 2011), but only very small numbers breed in British Columbia. However, thousands migrate through British Columbia to winter along the Pacific Coast, often offshore (Winkler 1996).

Distribution, Abundance, and Habitat In spite of being an abundant migrant and highly local winter visitor along the coast and in the interior, the species breeds in very small numbers at only two confirmed British Columbian locations.

The first British Columbian breeding was discovered when a pair nested amid Ring-billed Gulls on Whiskey (Grant) Island at the north end of Okanagan Lake in 1972. The number of nesting pairs had increased to 17 pairs in 1986 (Campbell et al. 1990), but numbers were not counted at this colony during the Atlas due to access restrictions. The Atlas added a second colony with 4-5 nesting pairs, also amid a colony of Ring-billed Gulls, at the Osoyoos sewage lagoons (Brown 2015). Atlassers found two other sites with flocks, including adults in breeding plumage and juvenile birds in potential breeding habitat in early-mid summer, on Lillooet and Harrison lakes.

Conservation and Recommendations Although the California Gull is considered to have experienced large increases in abundance since about 1970, the species is Blue-Listed as a breeding species in British Columbia, due to the very small numbers of both breeding pairs and breeding locations. The Atlas reports of probable breeding on Lillooet and Harrison lakes should be investigated for confirmation with early summer visits.