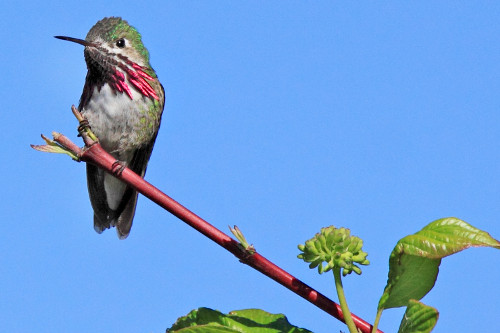 Characteristics and Range The Calliope Hummingbird, weighing less than a Canadian nickel, is the smallest bird in North America. It is also the smallest long distance migrant in the world (Calder and Calder 1994). It overwinters on the Pacific Slope of Mexico and its breeding range extends from the Sierra Nevada through drier montane valleys and slopes to British Columbia's Boreal Plains Ecoprovince, which means that some British Columbian Calliopes are travelling over 9,000 km annually (Calder and Calder 1994). There can still be snow on the ground and sub-zero overnight temperatures when it arrives in British Columbia. Males sometimes congregate in dispersed leks, with individuals in nearby territories able to hear and see the displays of neighbours (Hutto 2014), and females can overlap two nests at the same time with a second nest initiated while there are still young in the first nest (Batchelder et al. 2012).

Distribution, Abundance, and Habitat The Calliope Hummingbird breeds throughout much of the interior, as far north as the Bulkley Valley in the west and the Peace River in the east. The Atlas records documented breeding further north and east than was known when The Birds of British Columbia was published in 1990, but the overall range of the species remains much the same. The Atlas surveys did not record it breeding on the coast, although one confirmed and one suspected record of breeding exists for Vancouver Island (Campbell et al. 1990).

Atlas Probability of Observation and point count data indicate that the population reaches its highest abundance in the warmer valleys of the Southern Interior Ecoprovince, with other interior valleys (e.g., Columbia and Kootenay) supporting moderately high PObs values. Within these areas, highest abundance is in Ponderosa Pine and Interior Douglas-fir biogeoclimatic zones, and below 500 m elevation. The Atlas records highlighted a more restricted area of moderate abundance and higher PObs values between 670 and 1,250 m in the Sub-boreal Spruce Biogeoclimatic Zone of the northern Central Interior Ecoprovince. This is a lower elevation than the species inhabits in the Sierra Nevada of California, but within the elevation ranges observed elsewhere (Calder and Calder 1994).

Conservation and Recommendations There are no major conservation concerns for the species, which shows a stable trend and has undergone a moderate long-term population increase (Environment Canada 2011). Population trends should continue to be monitored by the Breeding Bird Survey and banding (Finlay 2007). Many of the research topics proposed by Calder and Calder (1994) still remain unexplored, including the possibility of using British Columbia populations to explore questions of constraints of small size on long distance migration and survival at the northern edge of a migrant's range, and associated research to assess the impact of landscape and climate change on the distribution and breeding success of Calliope Hummingbirds.