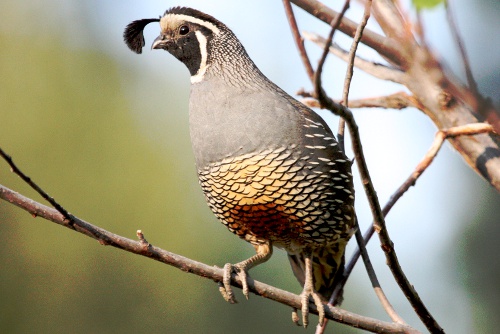 Characteristics and Range The California Quail is a beautiful, small gamebird characterized by a steel-grey body, six feathers (in the male) that form a crest, and a scaled nape and belly. It was introduced to coastal and southern interior British Columbia between 1860 and 1912, from its restricted native range in western North America spanning the southern Great Basin to Baja California (Campbell et al. 1990). Its characteristic, strident "put-way-doo" call is a common sound in areas characterized by small farms and suburban yards with nearby cover. It is resident, and forms coveys that occasionally include 100 or more birds, but more frequently less than 30, which can be seen running through gardens and hedgerows in search of seeds and bugs that make up much of the California Quail's diet.

Distribution, Abundance, and Habitat The California Quail is largely restricted to two main breeding areas in British Columbia: southeastern Vancouver Island in the Georgia Depression Ecoprovince, and the Okanagan and Kettle valleys in the Southern Interior Ecoprovince. The Atlas filled distribution gaps in these two regions, and also demonstrated range contractions since The Birds of British Columbia was published in 1990, most notably the apparent loss of the Fraser Valley population. The isolated breeding populations on the southern Cariboo Plateau and northern Vancouver Island may be introduced and not self-sustaining.

The species is similarly abundant in the interior as it is on the coast, clearly preferring the Ponderosa Pine and Bunchgrass biogeoclimatic zones in the former and the Coastal Douglas-fir biogeoclimatic zone in the latter. Breeding populations are generally found below 750 m, and most common from 250-500 m, although some may breed as high as 1,250 m.

In its restricted range, it is a common inhabitant of mixed agricultural and suburban areas that provide extensive cover for foraging, nesting, and roosting, and where supplementary feeding is widespread. The California Quail also uses more natural habitats, including riparian, grassland, and savannah-like deciduous and open coniferous habitats.

Conservation and Recommendations There are no conservation concerns for this introduced species. Overall in British Columbia, the California Quail appears to show a population increase since the 1970s (Environment Canada 2014), driven primarily by interior populations, with the coastal population doing less well. The reasons for the apparent local interior increases and coastal declines are unknown.