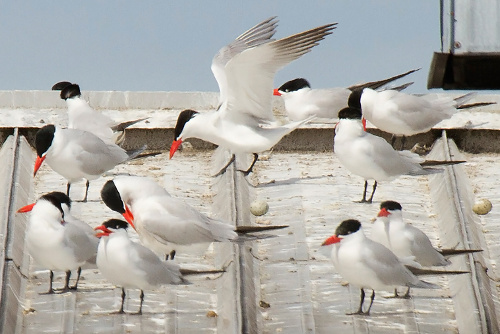 Characteristics and Range The largest tern in the world, the Caspian Tern is characterized by a white head with black cap, bright orange-red bill, gray wings with blackish tips, and a white belly and tail. It also has a distinctive raucous call that is frequently used to identify it well before it is seen. It has a widespread, albeit discontinuous, breeding distribution, and is found on all continents except Antarctica (Cuthbert and Wires 1999). In North America, colonies are scattered along the Pacific, Atlantic, and Gulf coasts, the Great Lakes, the Prairie provinces, and the interior western United States. Increases in numbers and distribution across North America since the early 1900s have been attributed to human-created habitats (e.g., artificial islands and platforms), and protection of both individual birds and breeding colonies (Price et al. 1995, Gill and Mewaldt 1983).

Distribution, Abundance, and Habitat Prior to the Atlas surveys, the Caspian Tern had only been confirmed breeding in the province once- in 1984, a pair nested on a sandbar at Roberts Bank and successfully raised at least one young (Campbell et al. 1990). Atlas surveys yielded breeding evidence in 11 squares from the Peace River to the Saanich Peninsula. Breeding was confirmed at one site, the first nesting colony in British Columbia, on the metal roof of a building in the Fraser River delta. Several hundred individuals and up to nine eggs were observed; however, ultimately the colony failed due to Glaucous-winged Gull predation. Probable breeding was detected on the Saanich Peninsula and in the Squamish River delta, and possible breeding behavior was noted in eight other squares. Due to the conspicuous nature of this species, the lack of confirmed and other breeding records likely reflects its true status in the province.

Increasing populations along the Pacific Coast have resulted in this species frequently being observed in the Fraser River delta in large numbers, including birds engaged in courtship and mating. As this has been the only area of confirmed nesting in the province, it should be watched for nesting in the future.

Nesting habitat for Caspian Terns typically consists of open, sparsely vegetated areas adjacent to water, frequently in colonies of other gull and tern species (Cuthbert and Wires 1999). Artificially created sites where natural habitats are unavailable or have been lost are often successful (Cuthbert and Wires 1999). A variety of substrates may be used; however, sand and gravel are the most commonly used (Quinn and Sirdevan 1998).

Conservation and Recommendations A growing North American population, combined with colony displacement from areas in Washington and Oregon, increase the likelihood that this species will nest again in the province. Management plans for the Columbia River estuary population were aimed at reducing predation of at-risk salmon populations through dispersing Caspian Terns to a number of smaller colonies (Shuford and Craig 2002). The results of this program are already visible as several of the birds present at the Richmond colony were banded at the colony on East Sand Island, Oregon (Suzuki 2015). Protection of future nesting colonies from disturbance will be beneficial; however, egg predation and harassment from Glaucous-winged Gulls may continue to be problematic to successful breeding.