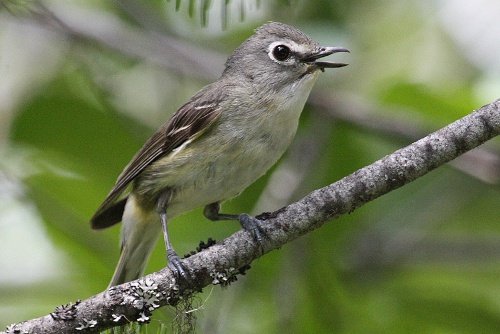 Characteristics and Range For most birders the presence of a Cassin's Vireo is usually signalled by its distinctive repetitious song: a nasal, rising "question", followed by a downward inflected "answer". The species breeds from coastal Alaska (Heinl and Piston 2010) through western mountain ranges to northern Baja California (Goguen and Curson 2002). It migrates, and overwinters mainly in the Mexican Sierra Madre and north to southern California. An isolated non-migratory subspecies is found in southern Baja California.

Distribution, Abundance, and Habitat The Cassin's Vireo is widespread across central and southern British Columbia but still sparse in the north, although the distribution is now more extensive than shown in Campbell et al. (1997) and even the most recent popular field guides (e.g., Sibley 2014). Atlas observers found Cassin's Vireos along the west coast of Vancouver Island and in river valleys along the central and the north coast, where they were formerly very rare, and reported the first records from the Haines Triangle in the far northwest. The species is also expanding its breeding range elsewhere in western North America (DeCicco and Hajdukovich 2008, Heinl and Piston 2010, eBird records).

The Cassin's Vireo is a bird of forested habitats. In the southern part of the province it is associated with coniferous forests at low to mid elevations. Here, it reaches highest abundance between 500 and 1,250 m elevation in Interior Cedar-Hemlock, Montane Spruce, and Interior Douglas-Fir biogeoclimatic zones. Further north it is a bird of lowland areas, often associated with riparian habitats and aspen stands along river systems.

Conservation and Recommendations Since it is apparently increasing in range and abundance in British Columbia, Cassin's Vireo is not in need of active conservation activities. Its life history is not particularly well known, perhaps because it was only recently split from other species in the "Solitary Vireo" group. In the northern half of the province, birders can help document the distribution and breeding status of the species by contributing sightings to eBird and participating in subsequent atlas programs. The species should also be looked for in the southern Yukon.