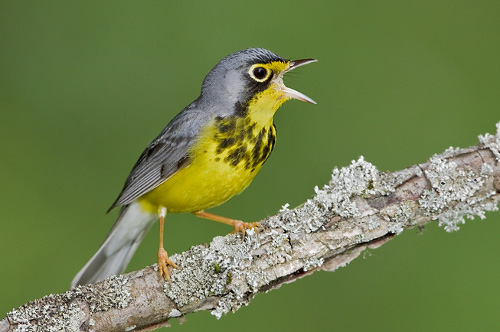 Characteristics and Range The Canada Warbler is easily recognized, being slate-coloured above, bright yellow below, with distinctive yellow 'spectacles' and a black necklace, the female with duller plumage overall. As a breeding bird, the Canada Warbler spends very little time in British Columbia, arriving in late May, and departing by mid-August. The species breeds in northern temperate and southern boreal forests from the Atlantic Coast west as far as northeastern British Columbia and the Yukon, and south through the Appalachian Mountains. It is a long-distance migrant, wintering primarily in northern South America and along the eastern slope of the Andes.

Distribution, Abundance, and Habitat The Canada Warbler is found primarily within the Peace River lowlands in the Boreal Plains and the Fort Nelson River lowlands within the Taiga Plains ecoprovinces, and in low-elevation valleys that drain the Rocky Mountain foothills. The range is more widespread than was known when The Birds of British Columbia was published in 2001, but largely consistent with that documented by Campbell et al. (2007), who noted a recent range expansion. However, the Atlas did not find Canada Warbler west of the Liard River - Kechika River confluence.

The species is considered fairly common in appropriate habitat, which has a patchy distribution (Campbell et al. 2007). The highest Probability of Observation values are from Fort Nelson and Liard River valleys, but local abundance based on point count data is similar in the Boreal Plains and adjacent Sub-Boreal Interior, and the Taiga Plains ecoprovinces, suggesting the PObs model may be over-representing the importance of the Liard River especially. In these areas, the species is most common below 500 m, and appears absent from the upland area that separates the Peace and Fort Nelson river drainages. These centres of abundance were unknown when The Birds of British Columbia was published.

The Canada Warbler is found mainly in mature and old deciduous forest, primarily Trembling Aspen (Populus tremuloides) with canopy gaps and a dense layer of tall shrubbery, usually of alder (Alnus) species. Younger forest and mixed spruce-aspen (Picea-Populus) stands may be used, but a tall shrub thicket is always present (Campbell et al. 2007). Occupied sites tend to be moist and nutrient rich, but the species is not restricted to riparian areas or steep slopes. Plant species vary considerably across its breeding range, however, the preferred stand structure appears to be consistent (Reitsma et al. 2010).

Conservation and Recommendations The Canada Warbler is designated as Threatened under Schedule 1 of the Species at Risk Act. Approximately 85% of the breeding population occurs in Canada (COSEWIC 2008), and Breeding Bird Survey trends show a large, long-term decline (Environment Canada 2014). This analysis does not include data from British Columbia, where the species has clearly increased in range and population size over the same time period (Campbell et al. 2007). Although Canada Warbler is Blue-listed in this province, it is not listed as a Species at Risk under the British Columbia Forest and Range Practices Act (FRPA), and is not eligible for habitat protection by Wildlife Habitat Areas. Considering the federal status of this species, it may be appropriate to list the bird under FRPA.