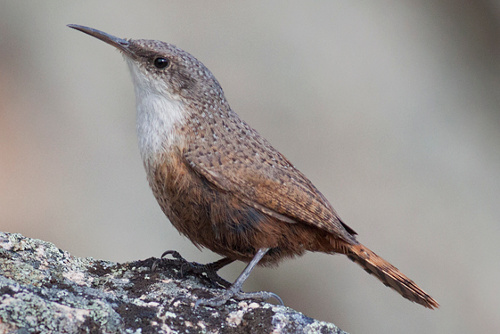 Characteristics and Range The Canyon Wren is a local permanent resident of steep rocky habitats throughout the more arid parts of western North America, from the southern Mexican Sierra Madre to the northern limit of its range in southern British Columbia. It inhabits fractured cliffs, boulder piles and rock slides where few other birds occur, probing cracks and crevices for spiders and insects (Jones and Dieni 1995). It sings a spectacular series of descending whistles, the notes prolonged and slowing in pace as the wren nears the end of each series. In exceptionally cold winters, northern populations may suffer serious declines or even disappear for a few years before numbers slowly build again, as happened to the Canadian population in 1969 (Cannings et al. 1987, Cannings 1995).

Distribution, Abundance, and Habitat Prior to the Atlas, nesting in British Columbia was thought to be restricted to the steepest and most arid rocky sites in the southern parts of the Okanagan Valley north to Naramata, and to one site in the West Kootenay near Castlegar (Campbell et al. 1997). However, the Atlas notes possible breeding north to the central Okanagan Valley, possible breeding in the Columbia Valley and its western tributaries, and an early spring singing bird above Seton Lake in the Fraser River catchment, relatively far to the northwest of all previous records. Occasionally, especially in autumn, single Canyon Wrens have been recorded in the north Okanagan and Thompson valleys (Campbell et al. 1997).

The Canyon Wren inhabits cliffs, rockslides, talus slopes, and steep boulder fields in open Ponderosa Pine (Pinus ponderosa) forest and dry grasslands. The low number of probable and possible breeding during the Atlas is likely because the Canyon Wren's preferred habitat is not well suited to survey work: rock slides and cliffs are difficult to access, and simply too full of cracks and crevices into which nesting birds can disappear. The Atlas records birds from 260-590 m elevation, slightly higher than the 275-435 m range noted in Campbell et al. (1997).

Conservation and Recommendations The Canyon Wren has increased substantially in British Columbia since 1970 (Environment Canada 2011), but remains Blue-listed (considered vulnerable) in British Columbia due to its small population, its tendency to decline in numbers during severe winters and the specialized and limited nature of its habitat. There is also some concern that the species can be disturbed by rock-climbing, which is rapidly increasing as a recreational activity in the Okanagan Valley. However, Richardson (1999) found no effect of climbers on wren numbers or behavior. Suitable habitat throughout the Southern Interior and Southern Interior Mountains ecoprovinces should be surveyed extensively during breeding season to establish an accurate provincial baseline population estimate against which to measure future range increases and decreases.