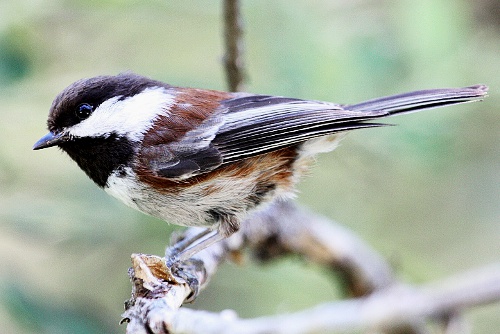 Characteristics and Range This is the smallest of the North American chickadees, sporting rich rusty-brown flanks and back that render it easily distinguishable from other sympatric chickadees. It also has a scratchier, squeakier song that helps to separate it from other difficult-to-see denizens of temperate rainforest canopies, like Golden-crowned Kinglet and Brown Creeper. Its global range is restricted to moister coastal and interior forests of western North America from southern Alaska to central California and east to the central Rocky Mountains (Dahlsten et al. 2002). It is a resident within this range, but some birds make seasonal movements to lower elevations, and in British Columbia some birds also disperse to higher elevations after breeding to exploit more abundant food resources. The Chestnut-backed Chickadee has an apparent affinity for hypermaritime ecosystems and regularly inhabits islands on the outer coast where Black-capped Chickadees are either extremely rare or absent. Like other chickadees, the Chestnut-backed nests in cavities; despite their small size and diminutive bill, in British Columbia, many Chestnut-backed Chickadees excavate their own nest holes rather than use holes made by other species (Campbell et al. 1997).

Distribution, Abundance, and Habitat The Chestnut-backed Chickadee is distributed in two geographically separate parts of the province: coastal regions and adjoining valleys of the Coast Mountains; and interior mountain ranges of the West Kootenay and adjacent areas to the north end of the Southern Rocky Mountain Trench. These interior and coastal populations are genetically distinct, consistent with post-glacial (Pleistocene) inland dispersal, especially in recent times (Burg et al. 2006). The coastal distribution is relatively unchanged but for local expansions, e.g., to the upper Skeena and southern Stikine river catchments. The range of the interior population, however, continues to expand northwards, with appreciable change even since The Birds of British Columbia was published in 1997.

The Probability of Observation model and Atlas point counts clearly show that the core of the population is at lower elevations (below 250 m) in the Georgia Depression, on Haida Gwaii and in the southern Coast and Mountains ecoprovinces, with abundance in Coastal Douglas-fir being higher than in the Coastal Western Hemlock biogeoclimatic zone. The Interior Cedar-Hemlock biogeoclimatic zone in the Southern Interior Mountains ecoprovince supports the core of the interior population.

On Vancouver Island and Haida Gwaii, where the Chestnut-backed is the only chickadee species, coniferous, mixed and deciduous forests are used, including drier stands of Douglas-fir (Pseudotsuga menziesii), Garry Oak (Quercus garryana) and Arbutus (Arbutus menziesii); but on the mainland where its range overlaps with other chickadees, it is restricted to moister coniferous forest (Campbell et al. 1997). Mature suburban gardens provide suitable breeding habitat also. The species requires rotten wood to excavate nests in both coniferous and deciduous trees, and readily uses nest boxes.

Conservation and Recommendations Whilst the Chestnut-backed Chickadee remains a common bird, British Columbia has moderate global responsibility for the species (supporting more than 30% of the population), and Breeding Bird Survey data indicate that populations in British Columbia, Canada and North America are declining (Environment Canada 2014). Partners in Flight list it as a United States - Canada Stewardship Species (Panjabi et al. 2012). In light of these facts, hypotheses for decline should be developed and tested. Forest and municipal tree management practices that retain decaying and dead trees, snags and stumps for nest cavities are encouraged.