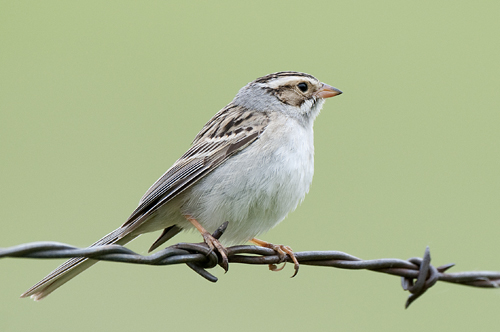 Characteristics and Range This petite sparrow is known for its distinctive buzzy song, while its clean and crisp markings, especially its head pattern, belie its rather dull name. Its breeding range now extends as a broad crescent from British Columbia to the general vicinity of the Great Lakes, and is no longer limited to the natural grasslands of the northern Great Plains, due to land clearance in forested areas. This sparrow is a short- to medium-distance migrant, wintering in arid plains and riparian areas of Texas and Mexico (Grant and Knapton 2012).

Distribution, Abundance, and Habitat Campbell et al. (2001) describe a post-1940 gradual range expansion of the Clay-colored Sparrow from the Peace River Lowland of the Boreal Plains Ecoprovince into much of southern and eastern British Columbia. Atlas results suggest that this population increase is continuing, with both westward range expansion from the Boreal Plains into the Northern Boreal Mountains Ecoprovince, and infilling throughout the remainder of British Columbia with the exception of the coastal ecoprovinces.

Abundance data and Probability of Observation data from point counts confirm that this bird's centre of abundance remains in the Peace River Lowland, as noted by Campbell et al. (2001). It is less abundant, but still moderately easy to find, across the remainder of the Taiga Plains and Boreal Plains ecoprovinces, as well as in the Rocky Mountain Trench and the valleys of the interior plateaus. Maximum abundance at 250 - 750 m matches the elevations of the Taiga Plains and Boreal Plains ecoprovinces. Atlas results show that small numbers of this sparrow nest in suitable habitat patches at unexpectedly high elevations (up to 2,000 m), especially in the Northern Boreal Mountains Ecoprovince, elevations that are well above those (up to 1,160 m) recorded in Campbell et al. (2001).

In the southern parts of its provincial breeding range, Clay-colored Sparrow prefers to nest within the Bunchgrass and Interior Douglas-fir biogeoclimatic zones; further north it occupies the Boreal Black and White Spruce and Sub-Boreal Spruce zones. It selects sites in shrub-thickets adjacent to open grasslands, parkland, and agricultural areas, with nearby stands of Trembling Aspen (Populus tremuloides), willow (Salix) and birch (Betula) species. Other artificial openings, such as regenerating clearcuts and transmission line clearings, are also used for nesting (Campbell et al. 2001).

Conservation and Recommendations The provincial conservation rank for this bird is "secure", although range-wide Breeding Bird Survey results show a moderate long-term decline. Conversion of shrub/grassland to cropland can result in declines, while succession following logging or fire can be beneficial (Grant and Knapton 2012). Appropriate management includes: leaving brushy edges around crop-fields, minimizing burning frequency, and avoiding disturbance (fire, cattle) during the nesting season.