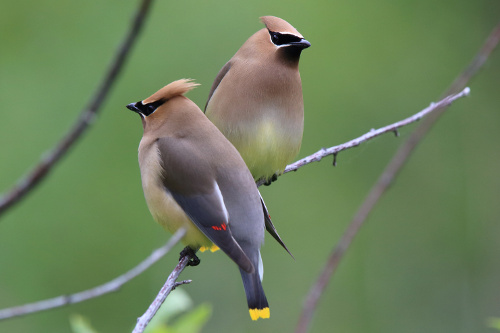 Characteristics and Range The Cedar Waxwing is one of three species of waxwing worldwide, and the only one almost entirely restricted to North America. Waxwings are named for the unique waxy tips to their secondary (inner) wing feathers, which together with the bright yellow tail band are carotenoid pigments formed from dietary sources, and play a function in reproductive success (Witmer et al. 2014). The Cedar Waxwing is a short-distance migrant, which breeds across boreal and northern temperate North America, and overwinters across the southern half of the continent and into Central America (Witmer et al. 2014). Within this range, it moves nomadically in response to food supplies, and is an important and very effective seed disperser. Breeding birds arrive in British Columbia later than most summer migrants, their nesting phenology being closely tied to peak fruiting.

Distribution, Abundance, and Habitat Atlas surveys map a very much more widespread distribution than was known when The Birds of British Columbia was published in 2001. Local expansions in the breeding season distribution, including more widespread confirmed breeding, are most apparent all along the Rocky Mountain Trench, across the Interior and Chilcotin plateaus west to the coast, in the Peace and Fort Nelson river lowlands, and across the far north. Whilst greater coverage may explain part of this increase in records, a significant northward expansion appears to be taking place.

The Probability of Observation neatly depicts the strong association with valley systems along the southern coast and southern interior, and on the Interior Plateau. Point count data refine this picture further, showing the centre of abundance in the Georgia Depression, as reported by Campbell et al. (2001), now extends to adjacent Coast and Mountains valley systems, with similar high abundance in the Southern Interior Mountains. Despite being widely distributed across the Central Interior, Southern Interior and Boreal Plains, the bird is less common in these ecoprovinces. Abundance is highest below 250 m, and most of the breeding population in British Columbia is concentrated below 750 m, generally much lower elevations than its relative the Bohemian Waxwing, and in a variety of biogeoclimatic zones.

Conservation and Recommendations There are no major conservation concerns for the Cedar Waxwing, which appears to be stable or increasing across its range based on Breeding Bird Survey data. Whilst able to profit from the increase in fruit trees associated with human expansion, the species may be vulnerable to pesticides applied in large-scale fruit growing operations like blueberry farms, orchards and vineyards.