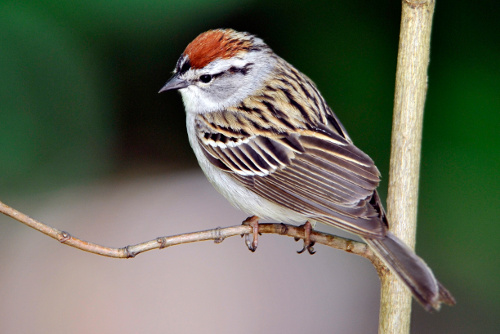 Characteristics and Range Named for its "tsip" (chip) call, this small sparrow is distinguished by its bold head pattern: chestnut cap, white supercilium and black eye-line. Its dry trilling song is evocative of summer across much of the province, from valley floors to subalpine heights. The breeding range of this sparrow extends throughout North America with the exception of Arctic tundra, subtropical deserts and other parts of the southern United States, and continues in suitable habitats through the uplands of Central America to Honduras (Middleton 1998). The Chipping Sparrow is a short- to medium-distance migrant, moving to the more southerly parts of the continent for the winter.

Distribution, Abundance, and Habitat Comparison of Atlas results with The Birds of British Columbia suggests that there has been little change in the general distribution of the Chipping Sparrow since the late 1990s. Both sources show summer/breeding records concentrated in the northeastern plains, especially the Peace River lowlands, the Rocky Mountain Trench, southeastern Vancouver Island, and scattered throughout the interior plateaus south of the Nechako River.

The Probability of Observation model indicates that the Chipping Sparrow is most likely to be found in the Taiga and Boreal Plains ecoprovinces, whilst point count data show it is most abundant in the Central Interior Ecoprovince, and also common and in the Northern Boreal Mountains, Taiga Plains, Boreal Plains and Southern Interior Mountains ecoprovinces. The Birds of British Columbia reported the highest numbers of Chipping Sparrow in the Southern Interior Mountains; this difference likely reflects the more standardized approach and increased survey effort associated with Atlas data collection. The broad range of elevations - from sea level to 2,500 m - where the Chipping Sparrow is found demonstrates its capability of nesting in a variety of biogeoclimatic zones.

Although commonly seen or heard in open areas such as grasslands and agricultural fields, the Chipping Sparrow nests in a wide variety of habitats that have in common the presence of trees or tall shrubs adjacent to open grassy areas. These include forest clearings and edges, subalpine meadows, dry slopes adjoining shrubby riparian zones, and rangeland. Abundance values for biogeoclimatic zones indicate that this species is typically associated with interior, montane, sub-alpine and boreal forests. It also thrives in human modified landscapes, particularly harvested forests (cut blocks), agricultural areas, orchards, and even city parks and gardens.

Conservation and Recommendations Breeding Bird Survey results suggest that the Chipping Sparrow population is undergoing a gradual, long-term decline, yet this bird remains one of the most common in the province. It has probably benefitted from the creation of semi-open landscapes by human activities, although this can also have adverse side-effects (Easton and Martin 1998). Cannings et al. (1987) reported that nests of this species in the Okanagan Valley were commonly parasitized by cowbirds - a process abetted by human fragmentation of natural landscapes.