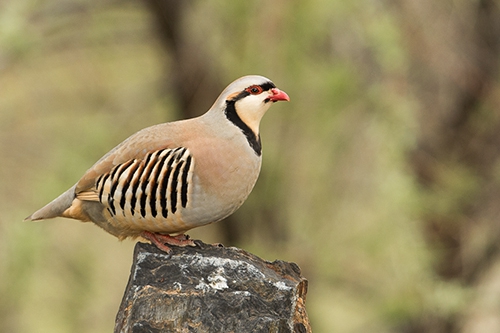 Characteristics and Range The Chukar is a strikingly-patterned game bird, introduced from Asia for sport, and has become a favourite target for upland game bird hunters across its western North American range. With a greyish-brown body, bold black eye stripe curving down to its breast, and strong barring on its flanks, it can hardly be confused with any other British Columbian bird. The Chukar was repeatedly, and largely unsuccessfully, introduced into British Columbia until the provincial Game Board (Campbell et al. 1990) brought birds and eggs from Oregon and Washington respectively. By 1955 population sizes had grown to the point where a hunting season was feasible, and massive harvests from the 1960s to mid-1980s apparently drastically reduced the population size. Small local populations often become established for short periods of time after introduction by hunters looking to train their bird dogs, although these populations seldom last more than a few years.

Distribution, Abundance, and Habitat The centre of distribution of the Chukar in British Columbia is the Okanagan and Thompson-Nicola watersheds, where it is nowhere common. In these regions the Chukar is primarily found at elevations between 250 and 500 m elevation, though some are found to 1,250 m elevation. There has been little change in Chukar distribution since The Birds of British Columbia was published in 1990, with perhaps a few more nests found, and small populations on Vancouver Island disappearing more or less entirely.

This species prefers areas away from the most intensive crop-based agriculture, including rocky cliffs, mountainsides, and grasslands (Christensen 1996), and in British Columbia tends to choose habitat dominated by Bluebunch Wheatgrass (Pseudoroegneria spicata), sagebrush (Artemesia) species, and Rubber Rabbit-brush (Ericameria nauseosa), with lots of rocky areas nearby. Chukars nest on the ground, under cover of shrubs, or away from vegetation where there is enough cover provided by piles of rocks. The chicks are precocial, and leave the nest soon after hatching.

Conservation and Recommendations The Chukar is an introduced bird that, according to Christmas Bird Count data, appears to have maintained its population since 1970 (Environment Canada 2011). Remarkably, more than 20 million were harvested in the western United States over the period 1947-1995 (Christensen 1996). In British Columbia, however, hunting pressure was much lower: from a high of 22,000 harvested in 1960 the number fell to 565 by 1985 (Campbell et al. 1990). With preservation of rocky and dry grassland and wooded areas within its range, and appropriate management of hunting, this species is likely to thrive where it has been introduced, perhaps limited occasionally by winter snow and temperatures.