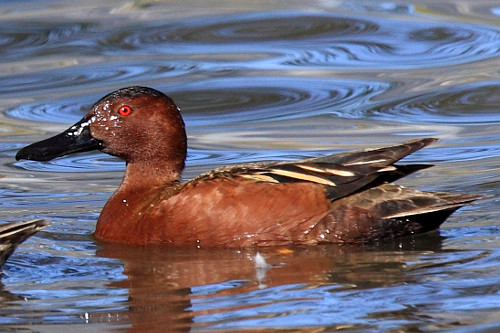 Characteristics and Range The male of this small, trim dabbling duck, with a bright blue patch on the upper wing and bright cinnamon or chestnut plumage on head and body, stands out among other ducks. It is a locally uncommon to abundant breeder in wetland areas of western North America from southern Canada through the highlands of Mexico and throughout much of South America (Gammonley 2012). A short- to intermediate-distance migrant, it winters from its southern breeding range through Mexico; seasonal movements in South America are poorly known.

Distribution, Abundance, and Habitat The Cinnamon Teal breeds across central and southern British Columbia east of the Coast Mountains. The Atlas surveys have expanded the confirmed and probable breeding distribution northward from that recorded in The Birds of British Columbia published in 1990. Bunnell et al. (2013a) reported significant range shifts northward in the British Columbia interior from the 1960s to the1990s. Most nesting is below about 1,250 m.

Probabilities of Observation are generally low everywhere, reflecting the fact that this is one of the least abundant dabbling ducks in the province (Campbell et al. 1990). Highest Pobs values are in the Thompson valley of the Southern Interior Ecoprovince and the Fraser Plateau area of the Central Interior Ecoprovince. The long-term population trends in North America, including British Columbia, remain poorly known (Gammonley 2012).

Conservation and Recommendations There are few conservation concerns for this species, although it may be affected if, as predicted, small wetlands in the dry interior regions become smaller in size and fewer in number due to climate change (Bunnell et al. 2013b).