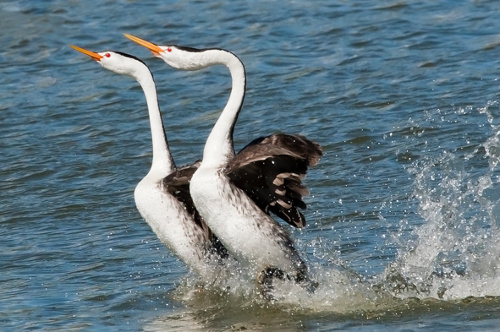 Characteristics and Range The rarest grebe in the province, the Clark's Grebe was considered to be a colour morph of the Western Grebe until the 1980s. DNA analysis confirmed that the Clark's Grebe tends to mate more frequently with its conspecifics than with the Western Grebe, and mixed pairings or observed hybrids were rare across the range (LaPorte et al. 2013). The range of the Clark's Grebe extends from its northern limit in southern British Columbia patchily south through the western and Prairie biomes to the Mexican Plateau. Two subspecies are recognized, A. c. transitionalis occupies the more northerly part of the range and A. c. clarkii is restricted to the south. A. c. transitionalis primarily winters along the coasts of Baja California (LaPorte et al. 2013).

Distribution, Abundance, and Habitat This grebe is a rare summer breeder confined to the Southern Interior and Southern Interior Mountains ecoprovinces. Atlas records indicate that there have been no distributional changes since The Birds of British Columbia was published in 1990. Breeding during the Atlas period was confirmed in three different years at the Western Grebe colony in Salmon Arm Bay on Shuswap Lake, and possible breeding was recorded on Duck Lake in the Kootenay Valley. The only other potential breeding site in British Columbia, the small Western Grebe colony at the north end of Okanagan Lake, was not checked thoroughly during the Atlas period because of access difficulties, but it has had no history of Clark's Grebe occupancy and it is unlikely that the species breeds there.

Observations in British Columbia ranged from one to six birds during the breeding season with the foreshore of Salmon Arm Bay being the most consistent and likely location for observations. Atlas records appear to fairly reflect the frequency of breeding, which may be annual. Mixed pairs have been reported on Duck and Shuswap lakes since 1982 (Campbell et al. 2001). One or two mixed species pairs have been observed annually in the Western Grebe colony at Salmon Arm over the same period and up to three apparently pure pairs have also been seen there (Dahl 2008-2013). Breeding was first confirmed in the province at the Salmon Arm colony in 1996 (Campbell et al. 2009).

Nesting occurs on freshwater lakes with large areas of open water bordered by emergent vegetation. Nests are found amongst Reed Canary Grass (Phalaris arundinacea), cattails (Typha species), or over submerged water milfoils (Myriophyllum species). Emergent plants are used to anchor the nests but if they are not available, submerged plants growing close to the water's surface may be used.

Conservation and Recommendations This species is Red-listed in British Columbia because of its small population size and very restricted breeding range. Western Grebe colonies should be carefully scrutinized each year to determine the presence and breeding status of Clark's Grebe and the frequency of mixed versus pure pairs. Observers should look for evidence of hybrids and hybrid fertility. Conservation initiatives to protect Western Grebe colonies will be appropriate for the Clark's Grebe.