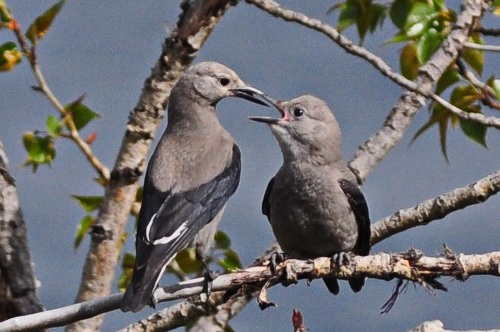 Characteristics and Range Originally mistaken as a woodpecker by Captain Clark in 1805, the Clark's Nutcracker was first described from specimens collected during the historic Lewis and Clark expedition. Sometimes known as Clark's crows or woodpecker crows, these endemic North American corvids are considered a year-round resident of higher montane forests. The Clark's Nutcracker is a specialist consumer and primary disperser of pine seeds throughout their western North America range, and is most often found in high altitude forests dominated by pine (Pinus) species (Tomback 1998). During the autumn, nutcrackers will often descend to lower elevations in search of additional seed crops and remain there over winter until breeding begins again. The Clark's Nutcracker's distinctive mid-gray body plumage contrasts with mostly glossy black wings and tail, and white secondary, vent and outer tail feathers. In addition to the plumage, it can be easily distinguished from Gray Jays by its long, pointed, black bill.

Distribution, Abundance, and Habitat The Clark's Nutcracker is widespread on the plateaus and benchlands of the Southern Interior ecoprovince, and on the slopes of the East and West Kootenay mountain ranges in the Southern Interior Mountains ecoprovince. The breeding distribution extends north in the rain shadow of the Coast Mountains to the Nechako Plateau. This range is similar to when The Birds of British Columbia was published in 1997, but the Atlas confirmed breeding approximately 300 km farther north than was previously known.

The highest abundance on point counts indicates the core of the provincial population is in the Southern Interior Ecoprovince, as noted by Campbell et al. (1997). The Probability of Observation model also suggests that the western Rocky and Purcell Mountains, and the western Chilcotin Plateau are important. Abundance increases with elevation, with highest values above 2,000 m.

This pine-obligate is closely associated with the Ponderosa Pine and Interior Douglas-fir biogeoclimatic zones where Ponderosa Pine (Pinus ponderosae) is found, and the Englemann Spruce - Subalpine Fir and montane Spruce biogeoclimatic zones that support Whitebark Pine (Pinus albicaulis). It breeds early in the year and will only nest in areas with a sufficient cone crop (Campbell et al. 1997).

Conservation and Recommendations The Breeding Bird Survey suggests a stable or even increasing population, but the reduction of available food resulting from the Mountain Pine Beetle (Dendroctonus ponderosae) epidemic and also white pine blister rust is a cause for concern (Environment Canada 2011). Projected drying climate scenarios in interior British Columbia may create conditions for pines to flourish, however (Hamann and Wang 2006). Continued monitoring and expanded research are essential to understanding how these factors may affect the Clark's Nutcracker.