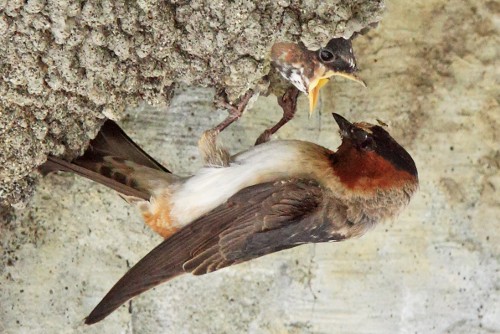 Characteristics and Range The colonial and highly social Cliff Swallow was one of the first species described by new explorers to North America. Birds are able to distinguish the voices of their own young amongst many others in the colony. They breed from the Mexican Sierra Madre north through western mountain chains to the Brooks Range in Alaska, and east across most of North America to the Atlantic Coast. The breeding range is expanding southeast into the previously unoccupied Southern Coastal Plains (Brown and Brown 1995). The main winter range covers central South America, east of the Andes.

Distribution, Abundance, and Habitat Cliff Swallows are migrants and summer breeders in the province. During the Atlas period, birds were widespread across the south coast and interior, from Vancouver Island to the Rocky Mountains and the far north, but sparse in the Coast Mountains and absent from Haida Gwaii. This range is much the same as when The Birds of British Columbia was published in 1997, but the Atlas fills some distribution gaps in northern portions of the province. About two-thirds of the Atlas confirmed breeding records are of two or more active nests.

The Probability of Observation model highlights the valleys and lower elevation plateaus of several ecoprovinces as being the most likely places to find Cliff Swallows. The abundance data show the bird is most common between 500 and 1,250 m elevation, corresponding to the elevation range of these areas. The colony data, however, indicates that the Peace and Fort Nelson river lowlands in the Boreal Plains and Taiga Plains ecoprovinces, and the upper-middle Fraser Valley in the adjacent Sub-boreal Interior Ecoprovince are the centres of provincial Cliff Swallow abundance. These areas support 10 of the 13 largest (100-400 nest) colonies, and the most colonies with 20-100 nests. This result contrasts with Campbell et al. (1997), who at that time considered this swallow most numerous in the Central Interior. A few known colonies in the Central Interior were not accessed during the Atlas, which may partly explain this difference. Many of the larger colonies recorded during the Atlas were on man-made structures like highway bridges; at the largest (400 nests), the birds were nesting on abandoned machinery and trailers by a highway.

Cliff Swallows are birds of the open country including grasslands, canyons, very open forests, beaches, farm lands, sloughs, marshes and ponds. They avoid heavy forest and alpine areas. Nesting habitat is generally steep rock faces and a wide variety of man-made structures, such as buildings, bridges, large culverts, highway overpasses or any other location where they can affix their gourd-like mud nests in colonies. Availability of suitable nest sites and nearby foraging habitats are probably the main limiting factors for the Cliff Swallow.

Conservation and Recommendations Breeding Bird Survey data indicate a strongly decreasing trend in British Columbia and Canada, particularly in the last 20-25 years (Environment Canada 2011). Causes for the decline remain uncertain with theories including a reduction of insect prey, toxic chemicals, climate change and landscape changes. It is not clear whether these pertain to the breeding grounds, the wintering countries or both. Conservation actions should include emphasizing protection and toleration of nest sites on structures.